There’s a reason why granola-crunching, nature-loving hippies sling a yoga mat over one shoulder and a sustainably-produced backpack on the other. Being an environmentally-aware human often goes hand-in-hand with practicing yoga on a daily basis. Imagine this: you have decided to join your school’s hiking club, and halfway up the mountain you’re regretting every decision that led to your throbbing legs and overtaxed lungs. Out of nowhere comes along a lean, lanky hiker, neither out of breath nor second-guessing his choice to trek up the mountain. He passes you swiftly, and a look of envy furrows your brow. He’s munching on some trail mix as he flies up the mountain, and you can’t help but imagine him as a yogi balancing in tree pose.

If you’re thinking this sounds like blatant stereotyping, you’re right! It is. But there is quite a lot of truth in the correlation between practicing yoga and being in tune with the environment. I am not referring to sweating through that hot yoga class at the gym. The asana, or the postures, only make up one aspect of yoga. Written almost 2,000 years ago, the Yoga Sutras of Patañjali explains that yoga has eight limbs, or ashtanga, with the physical practice being the third limb. The first two limbs are ethical and personal guidelines for living to practice mindfulness off the mat; the remaining limbs refer to the union of the individual soul with the universal soul.

“Yoga” is derived from the Sanskrit root “yuj,” meaning to join or unite. According to ancient scriptures, the practice of yoga “leads to the union of individual consciousness with that of the universal consciousness, indicating a perfect harmony between the mind and body, man and nature.” This harmonious connection between the individual and the universe is essential to the future of the environment. People tend to view the universe as something out of reach, and therefore unnecessary for survival, especially in today’s individualistic western society. Everything we do affects everyone else, and how one person or company treats the environment can affect everyone who inhabits it now and will inhabit it in the future.

Yoga can create a domino effect: once we begin to become more aware of our breath, we can begin to make choices that lead to clean air for all. And that might incite us to walk more or reduce our usage of aerosol cans. We must view humans and the environment as interconnected, not separate. Respect and reverence for nature are cultivated through yoga, discouraging us from taking our existence, or our planet, for granted. If our society continues to view humans and nature as two separate hemispheres, Earth’s future may not be so bright. It is necessary that people perceive nature and themselves as one and the same.

Henry David Thoreau was a yogi. Mindful living is at the crux of both yoga and Thoreau’s life principles. In order to unite oneself with nature, says Thoreau in Walden, you should “sell your clothes and keep your thoughts.” That mirrors aparigraha, or non-possessiveness. Ridding oneself of materialistic goods extinguishes all possibilities of distraction, and that in turn can increase one’s awareness of the outdoors. Letting go of these attachments also helps the environment by reducing waste and preventing the ocean’s destruction.

This theory of non-possessiveness, or aparigraha, does not mean surviving with the bare essentials. Rather it refers to re-evaluating “the way we ascribe meaning to things and consume them.” We should avoid being pulled into consumerism and purchasing the latest products because once the trends are over, the items discarded never really go away. Microplastics from yoga pants have been found in the ocean, harming marine life and the people who consume the microplastic-infested seafood. Purchasing sustainable clothing may cost more in the short-term, but will even out financially and ecologically, for the money won’t be spent on cheap, trendy clothes, and the environment will suffer less.

This small act of kindness translates to ahimsa, or practicing non-violence. Thoreau practiced this through civil disobedience with confidence that violence was not necessary in getting his point across. The ethical principle of ahimsa is a broader yogic discipline that can be applied to all facets of life. The “absence of injury” theory refers to the collective responsibility of humans to “minimize and end suffering.” This can be attained through small acts of kindness. An example of ahimsa is refusing a dish with meat. While this may seem like a negligible decision to make, it can initiate a ripple effect. Eating less meat causes less harm to animals. An increased availability of grains that would be used to feed livestock can be redirected towards feeding the hungry. Together, these small acts of non-violence aid in achieving environmental sustainability. Every step counts.

The majority of people are clueless when it comes to the planet they’ve lived on for the entirety of their lives. In Walden, Thoreau puts it this way: “Most have not delved six feet beneath the surface, nor leaped as many above it. We know not where we are.” This fact is central to understanding anthropogenic (human-caused) climate change. Yet the solution lies in yoga. Yoga increases awareness and appreciation for the small things in life, whether it be one’s own breath or a leaf that falls from a tree. Once this awareness is manifested, then people will be more likely to want to protect and respect their home: Earth.

Thoreau says “it is life near the bone where it is sweetest,” and this reasoning counts on living life simply and being one with nature. Yoga postures are deeply tied to the environment; it is generally believed that yoga originated in the woods. Some postures, like lotus pose, are named after flowers, while others, like tree pose, are named after plants. Yoga “came into existence by purely observing nature’s laws, the surrounding environment, animals and the balance between humans and the five elements,” according to an article in Replenish Living.

Traditionally, yoga was practiced in nature and yoga students cultivated gardens, looked after cattle and learned how to live in the wild. The environmental aspect of their retreat was an “integral part of their training,” according to David Frawley, a yoga practitioner and the founder and director of the American Institute of Vedic Studies. Yoga’s connection to nature in today’s world is “more relevant than ever” and is not merely dependent on urging everyone to practice asanas. Frawley says a yogic integration of “the outer and the inner, nature and spirit, on a planetary level” is critical at this time of environmental crisis. The mind, body and heart must be united with the world of nature, and until that relationship is established, the environment will be something to either use, conserve or preserve, rather than appreciate and respect. Yoga in the west has evolved into a personal, narcissistic type of fitness that removes the true essence of yoga.

Food also plays a major role in yoga. Ayurveda is a natural system of medicine that originated in India more than 3,000 years ago. The term is derived from Sanskrit and translates to the knowledge or science of life. Ayurvedaencourages one to listen to their own intuition and eat what their body is telling them to consume. Once sugar, salt and highly-processed food addictions are shoved aside, the body intuitively desires whole foods, which not only work to help the body but the environment at large. Veganism or vegetarianism does not work for everyone, and though it is more sustainable for the environment, locally-sourced foods can be eco-friendly as well. The important part is increased awareness of everything in the foods we eat. Recognizing taste and freshness in certain products could lead to purchasing more locally-grown foods, which could in turn help the environment.

Yoga’s interconnectedness is apparent in the cosmos as well. In yoga, cosmos does not refer to the stars and planets only but rather the universe as a “unified system” that is “both ordered and beautiful.” Buddhist monk Thich Nhat Hanh has lectured and written about how in order to become aware of our universal system and the damage humans have caused to it, a “spiritual awakening is necessary to address the global ecological crisis and to bring about an environmental revolution.” If yogic principles were learned and followed, they could hold the key to a better future.

The disconnect humans have with nature is quite new: “For the vast majority of our 200,000-year existence as modern humans, we have been nomadic hunters and gatherers, immersed in nature,” writes Mark Roule in a Kripalu article. Immersion in nature allows us to return to the blueprint of who we really are, and when an asana practice is combined with an outdoor setting, the benefits of yoga are magnified with increased immune function, reduced blood pressure and cortisol and a rise in overall happiness.

Silence, filled by breath, is one of the most healing ways to mentally restart and refocus. A foundational aspect of yoga, specifically the asana practice, is to become aware of the shell you inhabit: your body. Once you begin to understand the ways your body moves, the poses that feel good, the ones that cause you pain — all guided by your breath — you begin to live deliberately. You become an observer, first of your body and then of the planet around you.

If yoga was a more accepted and understood practice, if everyone practiced yoga in some way, people would begin to appreciate nature instead of taking it for granted. People can be incredibly oblivious to the world around them, especially in this digital age. Time outdoors is spent walking to and from their car, and even then they are swiping through Instagram. Littering has become a convenient and common practice. Driving is a necessity. Anthropogenic climate change is occurring because mindfulness has vanished from society. Yoga encourages environmental sustainability because of the practice’s innate mind-body connection, so people can begin incorporating tiny bits of mindfulness into their lives one step at a time — positive change can never be too small. 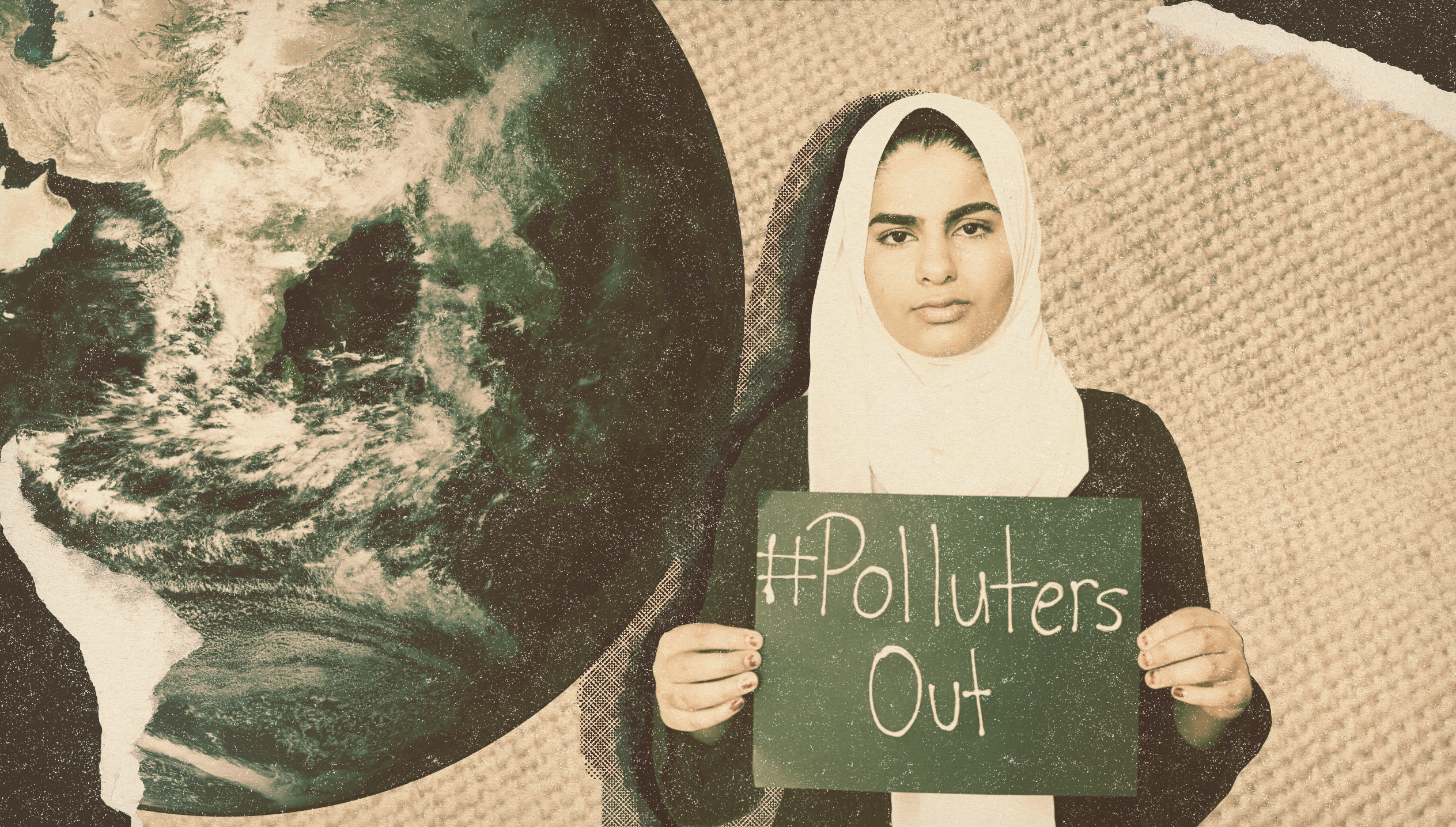