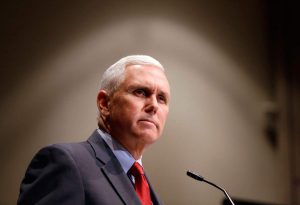 FILE – In this Tuesday, Jan. 27, 2015 file photo, Indiana Gov. Mike Pence announces that the Centers for Medicaid and Medicare Services has approved the state’s waiver request for the plan his administration calls HIP 2.0, during a speech in Indianapolis. Pence said Wednesday that he regrets the “confusion” caused by a memo about a planned state-run news website and will scrap the project if it doesn’t “respect the role of a free and independent press.” (AP Photo/Michael Conroy)