The Retrievers got off to a solid start, outscoring Stony Brook 11-7 over the first 4:16 of play.  Forward Jameel Warney threw down an emphatic dunk off of a turnover to tie the game at seven.  A put back layup by guard Quentin Jones gave the Retrievers an 11-7 lead with 15:55 remaining.

Down 15-9 with 11:55 left in the first half, Stony Brook forward Eric McAlister hit a layup and was fouled; he also nailed the ensuing free throw to cut the Seawolves’ deficit to 15-12.  However, UMBC forward Malik Garner answered right back with a 3-pointer that extended the Retrievers’ lead to 18-12.  A three-point shot by guard Joey Getz upped the visitors’ lead to 23-14, 9:17 before halftime.

Unfazed, the Seawolves responded by going on a 13-0 scoring run, a spurt that gave them a 27-23 lead.  Consecutive treys by forward Ron Bracey and guard Marcus Rouse got Stony Brook to within 23-19, and a Warney layup gave the Seawolves a 24-23 lead.  A three-pointer by guard Anthony Jackson culminated the run and gave the home team a 27-23 lead with 6:08 left in the first half.  Head Coach Steve Pikiell commended the effort of Bracey and the rest of the Seawolves’ bench, noting that its solid play helped turn the game around after Stony Brook’s starters came out “flat.” 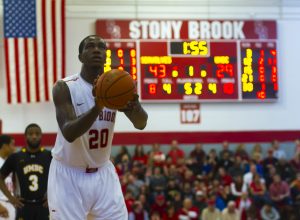 Warney led all scorers in the first half with 12 points.  Jackson also had a solid half for the Seawolves, scoring 10 points and dishing out four assists.  Bracey shined off the bench for Stony Brook, scoring eight points and hitting 2-3 shots from beyond the arc.  Guard Ryan Cook led the Retrievers with 11 points in the half.  UMBC hurt itself in the first 20 minutes by committing 10 turnovers.

One minute into the second half, Seawolves’ forward Scott King sank a three-point shot to extend the Stony Brook lead to 50-29.  King then hit a layup, which gave the Seawolves a 52-31 lead.  King’s layup was set up by great Stony Brook defense—Jackson and Warney both blocked UMBC layup attempts on the previous possession.  A jumper by forward Anthony Mayo put the Seawolves up by 25 points, 58-33, with 14:52 remaining.

Refusing to rest on their laurels, the Seawolves worked diligently to extend their lead.  Rouse converted on consecutive transition layups to augment Stony Brook’s lead to 31 points, 64-33.  Later, a reverse layup by Coley was followed with a dunk from forward Tommy Brenton; Brenton’s hoop upped the Seawolves’ lead to 75-35 with eight minutes remaining.
A three-pointer by Rouse with 4:10 remaining gave the home team a 41-point, 78-37, lead.  Then, after a trey by guard Ben Resner extended the Stony Brook lead to 42 points, King nailed a jumper to give the home team a game-high 44-point lead, 83-39, and close out scoring.

Jackson led the Seawolves in scoring for the game with 14 points.  Scoring was balanced for the home team; five Stony Brook players scored at least 10 points.  The Seawolves also played solid defense, holding UMBC to 15-57 (26 percent) shooting.  Conversely, Stony Brook shot 52 percent (30-58) for the game.  UMBC’s Cook led all scorers with 15 points for the game.
With the 83-39 victory, the Seawolves improve to 20-6 overall and 11-2 in conference play on the season.  They will now embark on a two game road trip, which will include games at both the University of Maine and at Boston University.  The team’s final regular season home game is Sunday, March 3 against Albany, 2 p.m.

Veganic: A Way of Life