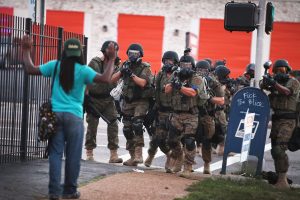 FERGUSON, MO – AUGUST 11: Police force protestors from the business district into nearby neighborhoods on August 11, 2014 in Ferguson, Missouri. Police responded with tear gas and rubber bullets as residents and their supporters protested the shooting by police of an unarmed black teenager named Michael Brown who was killed Saturday in this suburban St. Louis community. Yesterday 32 arrests were made after protests turned into rioting and looting in Ferguson. (Photo by Scott Olson/Getty Images)