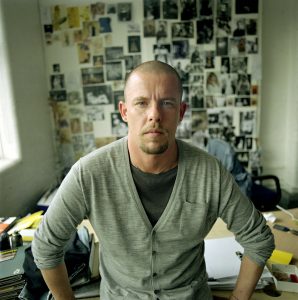 As the decadent shows of this year’s Mercedes Benz Fashion Week Spring 2014 are presented in all of their glory, the shadow of the 4th anniversary of the legendary Lee Alexander McQueen’s passing still rocks the industry. Substantial amount of time has passed for mourning by now but his presence still drive’s the company of his name sake and recently with the Alexander McQueen’s new collection presented this week recreates the aura of his presence once again

On the book shelf at home next to works by F. Scott Fitzgerald, Joan Didion and a canvas of Audrey Hepburn, sits evidence of the late Lee Alexander McQueen. It is a two hundred thirty eight pages bible of the designer with the fittingly named book in relation to him called “Savage Beauty” by Andrew Bolton. Alexander McQueen brought an air of expected risk with everything that was produced with his name attached to it.

In 2011, the Metropolitan Museum of Art featured his work for three months, a span of time that would never do the artist justice. Admittedly no amount of time could truly provide that sort of justice. This exhibit ran after the fashion industry alongside the rest of the world, had ample time to mourn. It was another way to celebrate his life.

His life’s work was not in the form of a painting or a sculpture but it was art. Some may consider it more substantial than art because it can be worn on the backs of those who appreciate it. The exhibit allowed for those who did not personally know him, share the most intimate feel of him as a person and artist. This intimacy could be felt through the proximity of his designs to the visitors.

His work was and still is unmistakably his. It was evident from how models hair was done for his shows to the incredibly detailed shoes displayed on the catwalk. His fashion shows included the models embodying themselves in their roles as a piece in a game of chess. Another iconic show that was played on an infinite loop in the exhibit was a hologram of supermodel Kate Moss in a whimsical but powerful way. He strived for authenticity down to the materials for every design, show and so forth. McQueen became recognized to those outside of the fashion industry when he began doing collections for Lady Gaga.  Gaga was as willing to take as much risk as McQueen. This pairing brought about even more innovative pieces.

Alexander McQueen’s presence is still quite evident in the fashion world today. His company is still thriving quite nicely, which is a tribute within itself. His collections were and are provocative and daring. The words quoted by him advocated for true beauty in comparison in his eyes in comparison to the publics and fashion industry’s view towards women physically. Some of his shows weren’t as aesthetically pleasing to the eye as some would hope for but that did not matter in the designer’s eyes. Alexander McQueen’s collections are the pinnacle of having an edge, willing to take risk and prepared to move forward indefinitely. For those who are willing to go into that almost dark part of them such as myself, Alexander McQueen is not just a name. The only way it can be put into words is that it is the surreal sunlight coming into contact with shattered glass that appears to shine as beautifully and brightly as if it were small diamonds being in contact instead.

A Night with Rainn Wilson

All Fish Go To Heaven