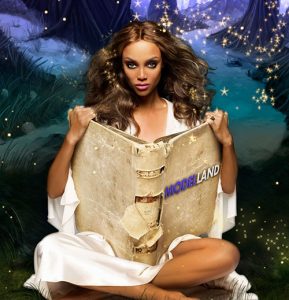 Okay. I’ll admit it. At first I was skeptical about everything. the title, the names (Desperada, Myrracle, Catwalk Corridor…really), the whole enchilada. It all made Tyra Banks’s Modelland appear as a saturated fantasy version of Candyland, but with the sugary treats and the quest to find the lost queen replaced by fashion and bitches fighting to become the next intoxibellas (aka, supermodels).

The premise of the story takes place in a world dominated by fashion where every girl dreams of becoming an “intoxibella,” but only seven do so each year. Each “intoxibella” has one of seven powers, which include multiplicity (cloning yourself), chameeleone (changing your appearance and clothes), ThirtyNever (reverting back to an appearance of 17 when you are about to reach and/or look 30), Excite-to-buy (the ability to make people buy products), seduksheeon (obvious), sixxsensa (enhanced senses and the power to see the future), and teleportaling (the ability to teleport). Occasionally, there is one who has all seven and is known as a Triple7, the most famous being Ci-L.

The main character, Tookie de la Crème, is your typical damsel-in-distress. She dreams of becoming an intoxibella, but considers herself too ugly and gawky, especially since she has her mother, sister and father to constantly remind her of this fact while everyone else acts as though she’s invisible. But on The Day of Discovery (T-DOD), when Modelland scouts travel across the globe searching for the new first year bellas-in-training, it’s obvious that Tookie, the one with the least chance of getting in, is chosen out of all the girls in Peppertown.

Once she arrives, she undergoes important classes that will help with all of life’s challenges, including mastication (the act of chewing food), Run-a-Way Intensive (strutting the catwalk) and CaraCaraCara (practicing poses and expressions for the camera). There, she also finds Ci-L, who had disappeared a few months prior to when the plot began, and goes on a quest to find out why the Belladonna, the head of the school, is punishing Ci-L. At the same time, she unconsciously ventures on another quest to find her self-worth and inner beauty.

As you can tell from my review, this is not a book I would recommend to you if we met on the street. I do admire Banks’s creative approach of forming a school that is parallel to the process and training that thousands of girls each year go through for a chance to appear on America’s Next Top Model and its international spin-offs.

I also enjoyed the way in which she illustrates the rules, such as not sharing accessories and make-up or leaving the business, though thankfully, we’re not in Modelland, where doing so will cause warts, wrinkles and infection to set in or leaving without permission will cause you to get kicked out and to age 50 years.

The biggest issue I have with this book is an inner conflict of its purpose. While Banks does assert that all women are beautiful, and what the modeling and entertainment industries say should not matter, the book also illustrates that the modeling industry in real life continues to favor women with a certain look. While I understand her message, how do you tell a 14 or 15 year old girl that she is beautiful, but not in the way that a model should be?

On a scale of A through F, Modelland gets a C-. It is exactly what you would expect from the title—tacky, predictable and superficial. While I do agree with the underlying themes of the novel, the oversaturation of the message that you have to look and act a certain way in the modeling world, and the typical stereotypes associated with industry in real life, make reading this book exhausting. It puts you in a position where you have to dig past the stereotypes, hair mousse and cat fights just to remember what the central themes are.

Of course, my assessment of this tale is incomplete until the next two books in the trilogy are released. Hopefully Banks will be a little more careful about how she conveys her message.

What’s the Deal With Religion

Wolfie off to Mascot Finals, But Can He Close the Deal?