It isn’t often that a Stony Brook University student is considered for the National Football League. In fact, no Seawolf has ever gone on to play in the mecca that is the NFL. Let me introduce, or re-introduce, Miguel Maysonet. Maysonet, who is no longer enrolled at the university due to NFL prep, just completed the most important job interview of his young life, the NFL Scouting Combine.

The combine, for those unfamiliar, is an invitational, week- long test for those looking to make it pro. It consists of drills to test every attribute of an athlete, including speed, jumping ability and other tangibles, as well as interviews and tests.

Maysonet is the first Stony Brook athlete to be invited to the event. As a running back, scouts were especially curious to see what Maysonet could do between the orange cones, and how fast he could run the 40-yard dash. Unfortunately hindered by a lingering hamstring injury, Maysonet had to sit out four of the seven drills, one being the dash.

Maysonet was able to test in the bench press drill, three- cone drill, and the twenty-yard shuttle. He completed 20 bench press reps, at the combine standard 225 lbs, which slotted him 15 out of 31 participants. Maysonet finished the three-cone drill at a time of 7.21 seconds and the 20-yard shuttle at 4.43 seconds. These times positioned him at 20 of 23 participates and 19 of 24 participates, respectively.

Looking at the bigger picture, Maysonet is a wildcard in the draft. Some NFL experts have him coming off the board around the fifth round, others around the seventh round, and some are even saying that Maysonet may not even be drafted at all. No worries for him, however, should he become an undrafted free agent. Maysonet would certainly be picked up by a team via a free agency deal, following the conclusion of the draft.

Of course, every prospect wants to hear their name called on the big three-day event that is the NFL Draft, and there’s more than just pride on the line. There are financial factors involved. A football player chosen in one of the later rounds may find themselves taking home a larger paycheck every week, compared to an undrafted free agent.

Clearly, Maysonet’s combine numbers don’t jump off the page, and, keeping everything in perspective, he is not one of the top running back prospects available. Still, one has to keep in mind how few potential draftees are even invited to the combine every year. Only 38 running backs in the entire nation were invited this go-around, demonstrating just how precious each spot is. The fact that a now-former Stony Brook University student is one of those select few is astonishing. The Seawolves football program entered the NCAA Division I system in 1999. Having a alumnus potentially entering the NFL this (relatively) early in the program’s history, sets the tone for years of future success. 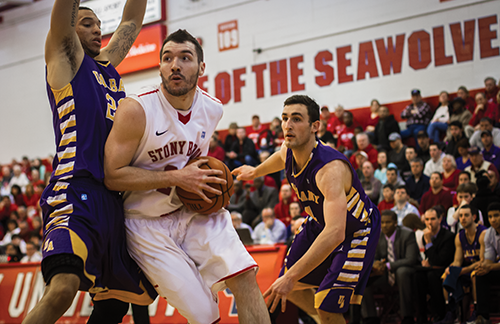