Recently, I was given the chance to live on The Earth, a planet directed by the Illuminati, starring Ghengis Khan, Mother Theresa, a thrill-seeking Eurypterus remipes, Henrik Ibsen and your neighbor’s cousin and featuring an original score by esteemed composers like Franz Liszt, a sparrow and They Might Be Giants. Living on the planet Earth has been a long experience, but inside sources have told me that it should be over pretty soon, so I’m convinced that I can give you a fairly thorough review.

Firstly, remember the movie Wall-E? Many people found the opening of that movie creative, but a little dull given its lack of dialogue. Unfortunately, the beginning of Earth was even more boring. I wouldn’t think anyone would want to wait 4 billion years just to see animals that are visible to the naked eye, but that’s what I had to do. Frothy ooze, volcanoes and lightning were cool at first, but the “wow factor” wore thin after a few hundred thousand years. Maybe doing it this way was an art thing; Tree of Life was pretty weird too. What’s even worse though was that it took around 4.5 billion years before anyone started speaking, and even longer until any of those people started speaking any sort of intelligible English. Didn’t the makers of The Earth realize that foreign films aren’t cool anymore? At least give us some subtitles when those protohumans are speaking Müller’s theoretical “bow-wow language.” If humans are only going to appear for less than half a percent of your planet, you need to make every moment of their dialogue count.

Visually, The Earth was pretty stunning. As mentioned earlier, for most of The Earth there were a lot of explosions and tidal waves and little else. Michael Bay could stand to take a few pointers from The Earth: although it got boring after a while, the sheer force of some of these explosions was truly stunning. I can’t rave enough about the Chicxulub asteroid. You should have seen it: an explosion so awesome, the directors had to fade to black for a couple of years. The Earth also had some pretty amazing vistas before we destroyed them all, like the Amazon Rainforest, the African savannah and that awesome tree fort Taylor built in her backyard. But not every choice was well-made. Whoever set parts of The Earth in Andorra needs to reevaluate his decision. And, it might be cliché in Earth reviews, but don’t even get me started on New Jersey. Even musically, for every Louis Armstrong trumpet solo, there was like four million years of pteranodons screaming at each other, and what felt like four million years of The Used screaming at each other.

Still, The Earth took a lot of risks, and I’m proud of it for doing so. With the exception of some heavy construction work outsourced to beings from a planet orbiting Alinark in the mid-2,000 BCEs, a brief cameo by some BEMs in New Mexico in 1947 and of course “British” “musician” David Bowie, pretty much every single human and animal appearing on The Earth had never starred on a planet before. Even so, almost all of them pulled through and did an admirable job with the material they were given. I mean, it was a pretty ridiculous plot direction to expect that a civilization would build a city in a swamp, but every single one of those Aztecs made that material work. And leave it to those talented Gomphotheres to make me believe that having an enormous extended lower jaw with shovel-like tusks was a good idea. Most organisms couldn’t have pulled that off even half as well. I hope to see all of these talented performers show up on a future planet; it would be a real shame if they only got to perform in one indie planet like The Earth.

All in all, The Earth was a pretty solid planet, no pun intended. It had its sad moments, like when a third of the world’s humans died from the Black Death or when stringwood went extinct, but it also had its genuine laugh-out-loud moments, like when you tripped and fell down those stairs while carrying that food and Season Four of The Simpsons. Was The Earth perfect? Absolutely not. Like I said, it was way too repetitive. Even after we got past that incredibly long introduction, I still felt like the story kept repeating itself. I get it, humans hate each other and like fighting over shiny things and places to farm. It was shocking when that first monkey clubbed the other monkey with a femur, but by the time we got to the Great Roman Civil War, I excused myself and got some popcorn. It just wasn’t the same anymore. At least later conflicts were souped-up with special effects. Plus, who can believe some of those plot twists? Have you seen a nudibranch? They make the ending of Devil seem logical. But still, The Earth was a surprisingly-compelling, if largely-flawed, indie planet deserving of your attention. If you haven’t gotten the chance to experience The Earth yet, make sure you do so soon, before it ends on Dec. 21. There has been no word about an extended run, but reviews have been good so I wouldn’t be surprised if it sticks around for a bit longer. After all, I came onto The Earth with very low expectations, but I was surprised by how compelling a little ball of water could be. 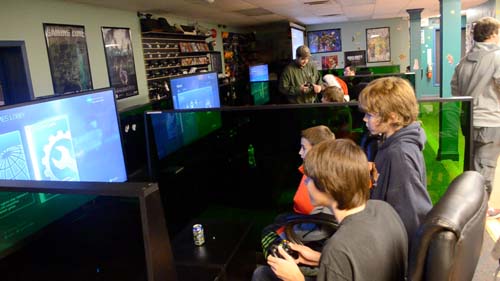