Every sports film is filled with inspiring moments, ups and downs and emphasis on the designated sport. However as “Million Dollar Baby” did before, “Foxcatcher” has done once again. Both show a darker more dramatic reality from that of normalcy that was shown slowly but with great purpose.

It isn’t about just wrestling. It is about the lives of Olympic Gold Medalists, Mark Schultz, Dave Schultz and their benefactor, John du Pont.

Mark Schultz was asked to move to the du Pont estate to train and form a team before worthy of winning the 1988 Seoul Olympics for USA in wrestling right before Worlds 1986. For a 27-year-old man who had no friends, was exhausted from being in his brother’s shadow his whole life and was being offered hope, a gorgeously impressive training facility and a large sum of money; a jump on the opportunity was logical.

Unfortunately, the support of du Pont brought with it an unhealthy lifestyle being offered as well. The lifestyle that was handed to him was devastating psychologically and physically.

His brother, Dave Schultz was called in shortly after it was clear that Mark could not control the new habits he became accustomed to. As du Pont and Mark fell out of their mentor figure relationship, Dave assumed the position as he usually did for Mark before du Pont came along. However this trios relationship change and losing in the 1988 Seoul Olympic caused tragic consequences that could not have been seen coming, in the film and in real life.

Track suit clad Channing Tatum appears on the screen as the insecure, low self-esteemed athlete, Mark Schultz. He appeared incredibly angry and unsatisfied with his life at first. As the film progressed, his character fluctuated from a large amount of confidence and happiness because of his dependency on John du Pont, who he considered as a father figure and mentor to self-destruction and desperation because of the same person. 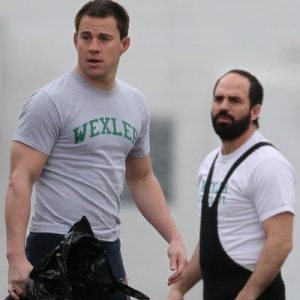 Tatum showed that he is more that just a well built body that can say funny things such as in the film“22 Jump Street.” A dark, serious and flexible actor made an unexpected aggressive appearance instead.

Tatum did well to show his idolization of his onscreen brother, Dave Schultz played by one of the “Avengers” stars, Mark Ruffalo. In turn, Ruffalo did well to show an exceptional amount of confidence in himself and his brother and caring for his family’s well-being. This confidence led to John du Pont’s shockingly strong jealousy and was one of the factors to the films tragic end.

Steve Carell, another actor known for his appearance in the comedy genre, appeared as the eccentric, selfish John du Pont. His uncomfortable demeanor was frighteningly unpredictable. A loose cannon would barely cover the description. The explosive need to receive approval from a disappointed mother drove every action and was crystal clear. Carell did well to layer his character’s motives and emotions sometimes in sheer silence.

Carell’s performance and “Foxcatcher” itself has had the world watching ever since the film’s world premiere back in May at the Cannes Film Festival. An Academy Award nomination is a circling rumor at the moment.

Sometimes a film or a book takes a few hours to a few days for a person to fully absorb and feel like him or herself again. Something inside was changed or a hidden emotional trigger was pulled. “Foxcatcher” has the caliber to do just that. Prepare yourself.