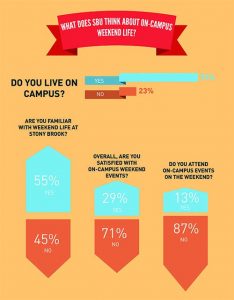 During her freshman year, Queens native Samantha Shetty went home almost every weekend to work at her tutoring job. But come sophomore year, the psychology major had a change of heart.

“It’s a comfort, going home on the weekends,” she said. But “it hit me how tedious it was.”

Later that year, Shetty, now a junior, sought out on-campus activities and events on the weekends instead of going home—and she found that there was a lot more going on than she thought.

But the main reason Shetty stopped going home so much was because she joined the Weekend Life Council, a group of students that make up just one of many entities under the umbrella of Weekend Life. This program compiles events and activities that take place over the weekend to entertain the students who remain on campus.

“My desire to join the Weekend Life Council was fueled by my desire to see more activities on campus,” Shetty said. “There’s so much to do.”

For the past few years, more and more Stony Brook students have stowed away their suitcases and opted to stay on campus Friday through Sunday. According to numbers of meal plan transactions gathered by the Faculty Student Association, about 27 percent more students stayed on campus on weekends during the Fall 2012 semester than they did that same semester in 2006.

To put it in simpler terms, Stony Brook is slowly becoming less of a “suitcase school,” one where students dorm during the week but pack up their bags and head home the days they don’t have classes. Angela Agnello, director of marketing and communications for the FSA, attributed the increase of students on campus Friday through Sunday to the success of programs such as Weekend Life.

“We have seen an upward trend in the average number of meal plan transactions on the weekends since 2006,” Agnello wrote in an email, adding that Weekend Life has enhanced the quality of campus life on the weekend.

Weekend Life features a wide variety of events and activities. Groups such as Weekend Life Council, the Student Activities Board and Campus Residences, along with clubs and organizations, hold movie nights, fashion shows, dances and other activities. Through the Weekend Life Grant, a $40-thousand endowment from the state, non- or under-funded clubs can allocate for money to hold events on the weekends as well.

And the events bring in a lot of students. On a recent Friday night, the Weekend Life Council held a Roaring ’20s roller rink in the Student Activities Center, complete with costumes, music and mocktails. Students squeezed side by side on the benches outside Ballroom A waiting to get in before it started. Shetty, who helped run the roller rink, said that 275 people came to the event, more than double the usual 125-student turnout for the council’s events.

“Honestly, it depends on the scale of the event,” Shetty said. “We were expecting about that much, but we always hope to get as many people as possible.”

Students and staff members who work within Weekend Life do acknowledge that there are challenges that come with providing such a large student body with activities, though. According to figures on the university’s website, about 48 percent of undergraduate students—about 8,200—live on campus. And according to a survey conducted by the Press where 77 percent of student respondents lived on campus, only 29 percent were satisfied with Weekend Life events.

“We can only do so much with our budget,” said Christine Noonan, program director for Weekend Life, which has a budget of $30 thousand funded by the Office of Student Activities. Noonan added that events, especially Weekend Life Council ones, try to cater to all different interests as best as they can.

But a common misconception among Stony Brook students, and a characteristic this school is known for, is that the campus is deserted on the weekends due to the lack of activities taking place. Students often leave to work, spend time with family and friends, or just escape the presumably desolate campus.

“Walk around on a weekend and this place is like a ghost town,” said Rebecca Anzel, a sophomore journalism major who lives here but is from Hicksville, about 40 minutes away in Nassau County. Anzel said she rarely goes home on the weekends and instead passes the time doing homework. She said that during her freshman year, once she noticed there were a lot of campus events on the weekends, staying here was more bearable than it initially was. But she said doesn’t think the university does enough to convince students to stay. “The university does a lot to make it seem as though it isn’t a suitcase school, but all students know that it is,” Anzel said.

Some resident assistants, however, have noticed that more students have been staying on campus—they just keep to their dorms.

“I think campus feels dead on the weekends because after a long week of classes and work, people just want to sleep and chill in their rooms on Saturdays,” said Cathy Rico, a sophomore Spanish major who is an RA in Tabler Quad’s Sanger College. “I think [Stony Brook] is a school that provides awesome residences and programs to those who live on campus, but also allows freedom for students if they need a break to go home.”

Because of Stony Brook’s diverse student body, many events are often hosted by ethnicity-based organizations and focus on specific cultures. Noonan said that one way for students to keep busy on the weekends is by attending an event or two that they probably would have overlooked if they were in a different situation.

And for Shetty, who has experienced Stony Brook both as a suitcase school and not, she offered the same advice.

“If you keep an eye out, there’s always something going on.”