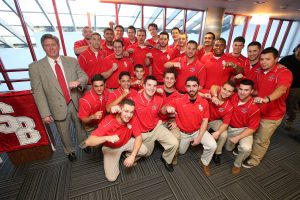 Here come the Seawolves! The Stony Brook baseball team just began their 2013 campaign and it has been a rough going thus far. The team managed just one win in their first 10 games. This is coming off an impressive “Shock the World” 2012 season, where they managed to enter the College World Series by defeating a mighty LSU team. Looking at the landscape of their schedule, Stony Brook did not face a fellow conference team through the 10-day stretch, so the record should be taken with a grain of salt.

Returning to the Seawolves squad are five of the nine 2012 starting position players, as well as 18 of last season’s 30 letterwinnners. There is also a nice mix of freshmen, sophomores and juniors; however, there are just two seniors on 2013’s roster, G.C. Yerry (LHP) and Tanner Nivins (OF).

Two of Stony Brook’s must productive hitters from last season, Steven Goldstein (So, OF) and Kevin Krause (So, C/OF), return to help the Seawolves pound away on their mission to regain College World Series glory. Goldstein finished last year with a .337 batting average, while Krause finished with a .330 average.

Also returning to the scarlet and grey is pitcher Frankie Vanderka (RHP), who had the best ERA on the team last season with at least 20 innings pitched, at 2.33. In Vanderka’s first start of the season, he pitched six scoreless innings, striking out two, against Florida International. More notably, this season, Vanderka threw his second career no-hitter, against Fordham University on March 10. Now in his junior season, he can, and should, become a key player on the Seawolves. His veteran presence on a roster lacking seniors, should prove to be crucial to the six freshmen pitchers on the squad.

Speaking of freshmen, there are 11 total new faces on the team, including Canadian Johnny Caputo (IF), who was drafted by the Oakland Athletics out of high school in the 12th round of the 2012 MLB Draft. For our benefit, he has decided to continue his education at Stony Brook, and he looks to improve his draft stock in years to come. Caputo has been relatively productive in the batting average and hit departments so far in his freshman season, which will hopefully lead to overall team success.

In the grand scheme of things, last season’s CWS entry has left more questions than it answered. Is Stony Brook a true baseball competitor, or was it a one-hit wonder? Will losing seven players to professional ball be too much for this 2013 squad to handle? Finally, where will the leadership come from on a team with just two seniors? Head Coach Matt Senk has a lot on his table this season. Let’s all have faith that he, and the rest of the team, is up for the challenge.

A Primer on Nutrition