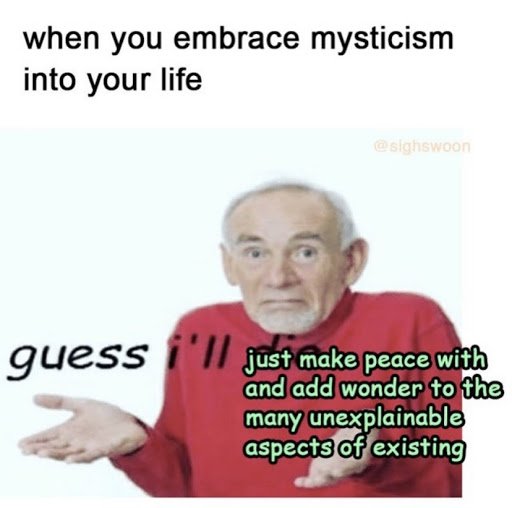 How spirituality exists in America today

Over time, religious thinking in the United States dissolved and sequestered itself to places of worship, cults and personalized practice. A swelling irreligious attitude has manifested itself since the 1990s, with 18% of the population identifying as not religious or spiritual, 27% not religious but spiritual and 26% completely irreligious.

Today, discussions of spirituality and the immaterial aspects of the mind exist exclusively in academic disciplines, most notably motivational and cognitive-behavioral psychology and philosophy. We’ve dug ourselves into an array of assumptions about human behavior, falsely introduced by pop psychology. These assumptions come in the form of self-help books, myths like the “learning styles,” generalizing personality tests and that smiling in the mirror makes you happier. Pop psychology comes from the “replication crisis,” where a lot of replicated experiments get different results. Shoddy research methods are pretty common as well — the barrier to entry for psychology research is low in comparison to something like medicine.

This research colonized public conjecture surrounding mental wellness, childhood/adolescent psychology, and pedagogy. It also created an ideological disjunct between us and our unlabeled selves — a dislocation between knowledge and mysticism.

The language of this kind of thinking uses terms like trauma, manifestation, emotional intelligence, toxicity and mindfulness, and revolves around the notion of an “inner child” and a “higher self.” In the U.S., meditation apps and and classes are on the rise, boasting these perspectives on psychology and creating a Western gaze upon Eastern expressions of spirituality.

Psychology has always been on our minds, but it took a while to become the kind of academically rigorous, medicalized, diagnosis-adherent supplement to Western medicine it is today. We’ve always questioned our inner labyrinths through literature, poetry, music, theology, philosophy and a range of other disciplines. At the core of all human creation, thinking and organization, there are always invisible motivations.

Every human culture developed alongside the notion of the supernatural and the invisible. While it is difficult to define the development and trajectory of human spiritual practice, it’s easy to see that spirituality is a cornerstone of human life. But spirituality is simple. It’s the notion of immateriality, of a mind separate from body — and a lot of people in the postmodern world seem to be missing it.

After the rationalism-high of the European Enlightenment, and the scientific method finished sowing radical skepticism about the Church’s canon, philosophers boasted that “God is dead,” and made other damning premonitions about the future of human life after dogmatic religion crumbled. During the psychoanalysis boom at the turn of the 20th century, the influence of traditional religion further degraded and the psychiatrist Carl Jung identified a “spiritual problem of the Modern Individual”  — widespread feelings of inadequacy and aimlessness that are a product of the spiritual void religion left behind. The “death of God” was a warning against profound uncertainty.

In this irreligious, anti-spiritual, scientific method-adherent society, we’re experiencing a resurgence in spiritual thought, one that sometimes feels like a desperate yearning for new spiritualities. We’re in a heyday for astrology, reformed religion and personalized spirituality. Through desperation, we’ve developed a new, customized melting-pot spirituality. Organized religion and personalized spirituality differ in their accountability, sense of community and dogmatic rigor. Gabi Abrão, a digital artist and spiritualist, embodies this kind of neo-religion, and how it intersects with meme culture. 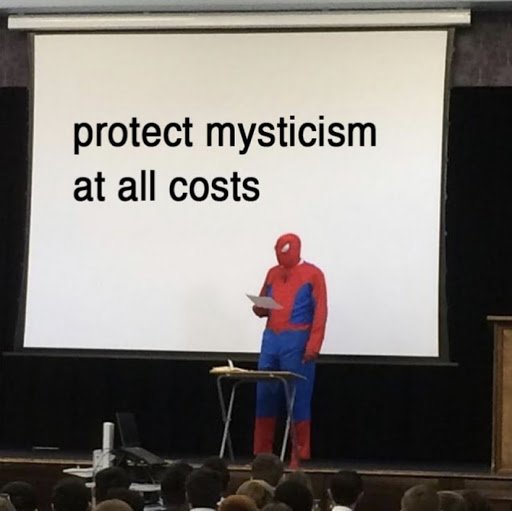 “The structure and accountability in organized religion can do wonders for some, yet be restrictive and limiting for others,” Gabi said. “Organized religion also boasts a shared, definite experience, which can limit the potential for one’s abilities and exploration. Personalized spirituality can become too free-form, even lazy for some, yet liberating and ideal for others. I believe in personalized spirituality with structure.”

For Gabi, this means borrowing structure from existing, established religions and modifying it to one’s circumstances. “That is where I believe balance is found,” she said. “Exploration is key. I think you only find out what you need by trying different forms of spiritual practice out.”

New age spirituality can feel pretentious, even mocking of older spiritual traditions. But there’s a pleasant rhythm to it — it can manifest itself in monthly “challenges” that easily mobilize people into a single, ritual task. Specifically the “No Fap November,” challenge,  or no- masturbation- November challenge. The challenge is geared towards men and grounded in the incorrect belief that retaining your sperm repurposes its life force back into your spirit. The truth is, sperm doesn’t carry life force, and abstinence doesn’t send it anywhere else. Examples like these prove that we’re hard-wired for ritual and yearn towards our former allegiance to self-improvement grounded in faithfulness.

The fact that @sighswoon has 100 thousand followers and 428 subscribers to her paywalled content proves the same. It shows us that spiritual language is compelling and profitable.

“My current expression of spirituality is playful, explorative, and aspirational,” Gabi said. “I believe that following globalization and the internet, we have more knowledge and awareness of spiritual practices from all around the world. There are truths and flaws in every single one. Passed down research.”

Gabi’s Instagram page, @sighswoon, is an expedition into this kind of neo-spirituality, and representative of our creative habit of collaging information from the past to create something new. Gabi believes in “the hunt for a new spirituality.” A spirituality that “compliments the digital” — the new modes of communication and massive media upheavals. This “new spirituality” will use all the leftover information from spiritual leaders to create a new model, something possibly not as rigorous or rigid. Something that “caters to our current society,” in her words.

@sighswoon’s Instagram acts as a self-help forum, where she creates a “positive language with the invisible,” and independently monetizes her content through Patreon. She offers advice, her takes on astrology and insight into other spiritual trends. Her spirituality is an eclectic mix, borrowing dictums from East Asian philosophies, Western mysticism and cognitive, maybe even pop psychology.

People discover their spirituality in many ways — some people use psychedelic drugs, some abide by religious dogma and some just want to achieve ritual stillness, a reprieve from the chaos of the workweek. For Gabi, her spirituality came from a sense of “in-betweenness” from her Austro-Brazilian heritage and mobility.

“I believe being born in Los Angeles to immigrant parents informs many of the themes in my work — first, a sense of in-betweenness one feels when she does not fully belong to one culture or country, to have three languages in the house,” she said. “I believe this informs my interest in all that is shapeshifting, ever-changing, in-between, unknown. Also, my father is a very spiritual man who centers mysticism and spirituality over all else. This informs my desire for the mystical, the invisible — my fascination with it.”

Creating “a language with the invisible” is a deeply powerful goal, and her obsession with it manifests itself in various visual and textual projects. In a recent art project called “Relationships With The Ether,” individuals sent Gabi images of themselves with an ex-lover, the ex cut out and replaced with an image of clouds in the sky. The project emphasizes  that “the feelings our exes give us are so nuanced and ever-changing,” and that “their presence turns into this open space up for interpretation,” she said. The point is to emphasize invisibility, or all immaterial aspects of relationships and mind.

Her expression of self-help through humorous memes demonstrates her philosophy on comedy itself, and an appreciation for quickness, accessibility and stealthy penetration. Humor is very important to her. “It’s a great release to me, and so necessary to grow and navigate this wild life,” she said. “There are so many paradoxes, so many surprises, so many ways we play tricks on ourselves and others. There is a lot of nonsense and confusion to living, I think laughter is one of the main ways to release it.”

Beyond the humorous substance of memes, she maintains deep appreciation for their form as well. “They’re accessible, quick, funny,” she said. “They sneak into your feed and your consciousness effortlessly! They always feel like they are from a friend because they are the inside jokes of the internet. You feel like you’re in on something when you understand a meme or enjoy it, like a club. It’s nice. “Memes push you to simplify an idea with help from a comical, visual aid.” 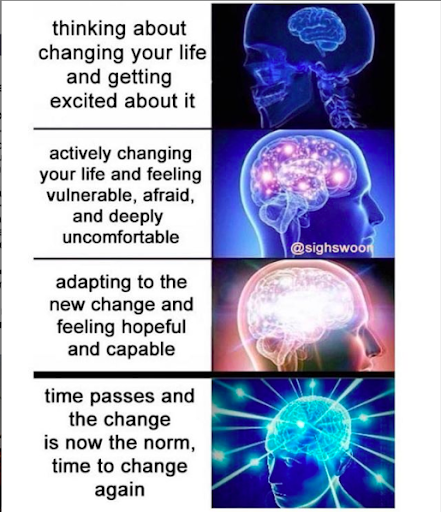 Instagram and memes often get dismissed as cultural tokens. “Like film in the ’60s, Instagram’s newness (and the volume of content it holds) sometimes tricks us into overlooking its cultural value,” tTo quote an article in The Outline. But @sighswoon is a performance, a statement towards the dismissal of past spiritual authorities through memes. Self-help through this new format helps simplify difficult thoughts into one-liners, and reassures through brevity. It’s almost like the power of journaling negative thoughts. It simplifies nebulous feelings and creates intense relatability between Gabi and her audience.

After studying conceptual art at Santa Monica University, Gabi is now 25, living in L.A. and learning Portugese to ground her ethereal linguistic toolbox in reality. She’s trying to see where this reconnection to her Brazilian citizenship will take her. It’s all been very inspiring and riveting for her.

Advice and recommendations from Gabi

We’ll close off with art and aphorisms, to extend some self-help and to paint a clearer picture of some of the books and musicians that help lead her creative thinking to fruition.

Gabi defines our relationship with technology with the notion of a “cyborg.” This is by no means a condemnation — she recommends we accept and appreciate our technology.  An example she gave is using our GPS to get somewhere and then hugging the loved ones at our destination. The use of navigation services represents our reliance on our technological side, and the emotions we feel once we’ve expended the technology and gotten there represents our humanity. To reconcile this sort of neophobia against cyborgitude, she said we should understand “that all technology, including the internet, was invented by humans and is maintained by humans,” she said. “It is an extension of humanity, a tool. An alien species didn’t arrive on earth and force any of this on us, we created it, collectively, little by little. And that’s beautiful. It is human to evolve, to create, to push boundaries. And we are experiencing this every day, in real time.”

But we should also be careful of the pitfalls to digital life. “The digital age makes things move very quickly — trends, attention, influences, calls to action… it can be a very emotional and stressful experience, this overload of info,” she said. “I think it is more important than ever to ground yourself in what and who you love, what you trust, because our generation will give you new things to obsess over every single day if we aren’t careful. With grounding, with a strong sense of self, all this information can be channeled into wonderful personal projects and opportunities for growth and entertainment.”

If you want to know Gabi better — an album and two books to check out, in her words:

“The Jungle is The Only Way Out by Mereba is an incredible album that came out in 2019 and was an absolute gift to my life. I find this album to access emotions to everything I find interesting about being alive now — spirituality, romantic confusion, self-empowerment, a new momentum, the need for freedom in all of it. Even the sound feels digital-meet-earth. I highly recommend the whole album.

Plus, The Seven Spiritual Laws of Success by Deepak Chopra is my #1 book for lifestyle and mindset.

And lastly, Sculptures for the Blind by Lenka Clayton is a wonderful book that discusses pretty much everything I am interested in through the medium of an art sculpture — it discusses perceived value, varying perceptions, the invisible stories that exist in objects and transactions.” 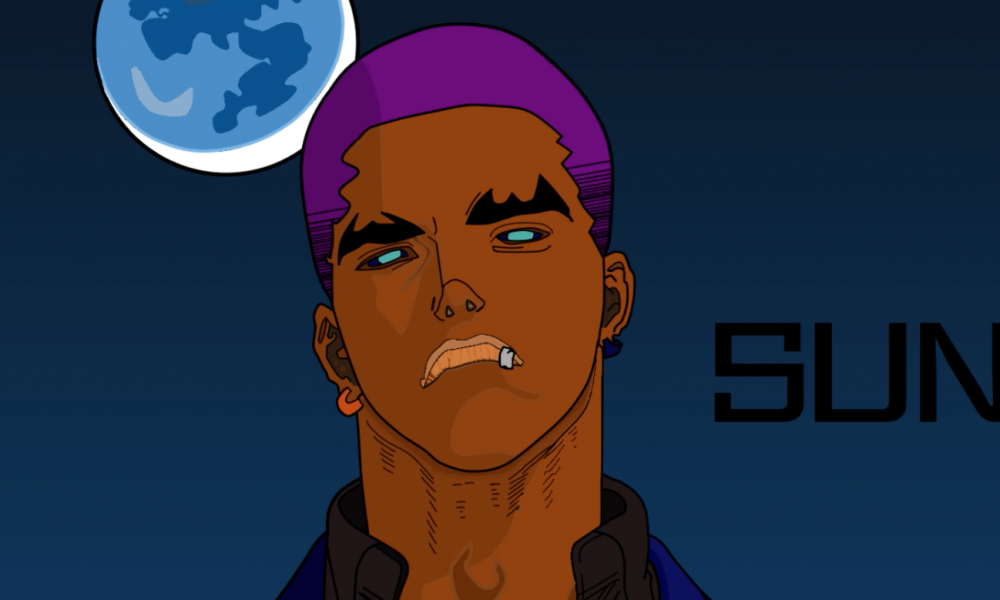 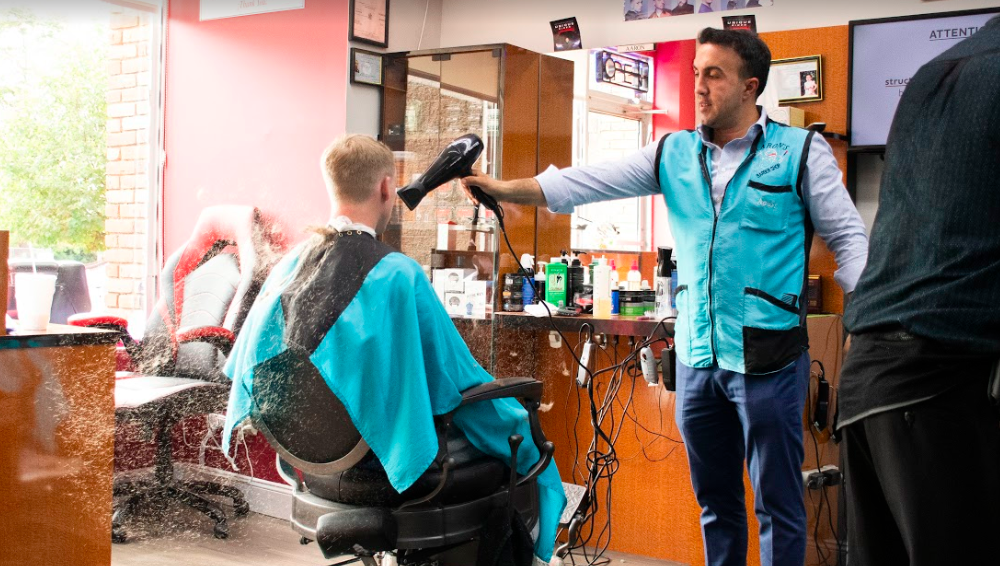 Shaping up St. James with fresh cuts from Queens