A red pickup truck gently pulls over to the side of a busy New York City street. The driver strains his neck to avoid jostling his fragile cargo—250 buzzing boxes. Curious onlookers approach the mesh lining the box.

On an early April morning, beekeepers from across the city are lining up to take home their boxes of bees—the honey bee season is about to begin. These beekeepers are at the forefront of urban beekeeping in New York City.

Beekeeping is different in the city. Hives are peppered throughout the five boroughs on rooftops and in backyards. The city legalized urban beekeeping in 2010, and more than 400 hives have been approved by the NYC Department of Health and Mental Hygiene. Milwaukee, Los Angeles, Dallas and other major cities have all seen huge growth in their bee population, largely due to urban beekeeping.

This growth has come at a time when the global bee population has fallen dramatically. Colony Collapse Disorder (CCD), a phenomenon that makes bees abandon their hives in droves, has decimated the honey bee population. Commercial and private beekeepers across America lost nearly 44 percent of their colonies between 2015 and 2016, according to the Apiary Inspectors of America, a nonprofit that pushes for better beekeeping practices. The U.S. Fish and Wildlife Services gave seven different bee species an endangered status in the past year.

More than a third of the world’s crops depend on honey bees for pollination and a continued dip in the honey bee population would have a drastic impact on global agriculture. The number of beehives in America has continuously decreased over the past 60 years, from 6 million in 1947 to 2.5 million in 2014, according to the U.S. Department of Agriculture (USDA). Almonds, melons, alfalfa, blueberries, peaches and 85 other crops depend on bees for pollination in America. Honey bees contribute more than 15 billion dollars to the economy through their pollination, according to the USDA.

The effects of a decreasing bee population are already being felt. Commercial beekeepers who rent out hives to farmers for pollination have continuously increased their rates over the past decade, with rental prices increasing from $45 to $75 in 2005 to $165 to $200 in 2015.

This spiral is forcing beekeepers and researchers to find ways to fix the damage caused to the bee population, or at least keep it from getting any worse. Urban beekeepers are playing a key role in developing a healthy bee population and finding techniques to keep hives alive. 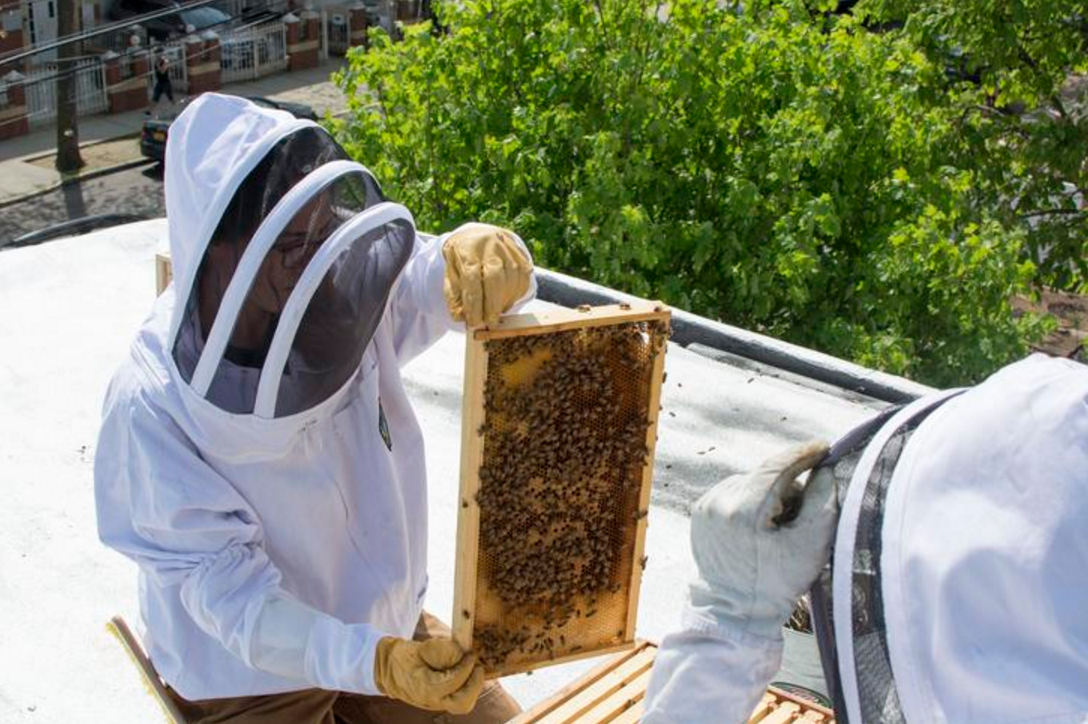 Josh Deeter and Adrienne Cichelli climb up a metal ladder into a small crawlspace in their home in Corona, Queens. They carry beekeeping suits and buckets of equipment through a rooftop hatch.

They are dressed in veils and white full-body suits as a few dozen bees flit past their heads. Children play in the street and cars blare music from the road. Deeter and Cichelli walk toward one of the two hives where bees are streaming in and out of a small grate at the bottom. The hives look like a set of kitchen drawers, and Deeter cracks the top one open to check the frames. It’s early in the season and the bees are still getting used to their new home. There isn’t much honey yet.

Deeter and Cichelli have been urban beekeepers for nearly two years. They learned how to manage their hives and maintain their equipment from the New York City Beekeepers Association (NYCBA), which holds workshops before the start of every honey bee season in April. These workshops mostly attract new beekeepers who want to start a hive of their own, but experienced beekeepers attend in small numbers to learn skills to take back to their hives in the countryside. These rural beekeepers are following a norm that has been quickly established in the apiary world—bees from the city are tougher than bees from the farm.

Ted Rybkiewicz is a teacher who inherited a small apple orchard in upstate New York. He spends his weekends tending to the orchard and trying to manage his six hives.

“The last time I went to check my hives, there was a layer of dead bees two inches thick,” Rybkiewicz said.

He said he lost nearly five thousand dollars over the past three years trying to maintain his hives. For the 2017 season, Rybkiewicz bought five hives from the NYCBA. He was among the dozens lining up along the sidewalk before sunrise to collect his bees.

“The last time I drove them up to the farm, some of the bees got out of their cages,” he said. “That was a tense car ride.”

This time, there were no escapees. The bees rumbled quietly in the backseat as the sun rose and Rybkiewicz drove to his apple orchard.

When he arrived at his farm, he suited up in the standard beekeeper garb. As he introduced his recently purchased bees to their new homes, he talked about the urban beekeeping class he’s taking. He’s trying to learn techniques to keep his bees from abandoning the hive.

“If they can keep them alive in New York City, I don’t see why they can’t help me out here,” Rybkiewicz said.

Best Bees, a Boston based beekeeping research company, found urban bees surviving winters at a rate of 62.5 percent compared to a 40 percent rate for rural bees, in research conducted across fifteen states. They also found that urban bees produced more honey than their rural counterparts. City bees produced an average of 26 pounds of honey per hive per year compared to country bees at an average of 16 pounds.

Noah Wilson-Rich, who has a doctorate in biology, founded Best Bees in 2010. His decision to start the company came as CCD devastated the global bee population. It’s a phenomenon that causes bees to abandon their hives in droves, leaving behind the queen, a few nurse bees and whatever honey they managed to harvest before they left.

“2006 was when the bees started dying in mass,” Wilson-Rich said. “We aren’t looking at what’s killing bees because many researchers are already looking at that. We’re looking at why they’re surviving.”

Urban beehives offer a unique opportunity to conduct research on CCD since they haven’t been hurt by it nearly as much as rural hives. Testing the environmental differences between a city hive and a countryside hive can show what may be keeping the urban bees alive at a higher rate.

Early research from the USDA pointed to pesticides as a cause of CCD, but research conducted by Wilson-Rich has shown that this isn’t the case.

“There are relatively equal pesticides in the cities compared to the countryside,” Wilson-Rich said. “The absence of pesticides is not associated with where we’re seeing bees thrive.”

Best Bees found that the key difference between rural and urban hives is the diversity of nectar available to the honey bees. American farms changed from multiple crops on a single farm to a monocrop culture in the 1950s and the single crop farms don’t have enough variety to support a healthy diet for local pollinators. This unhealthy diet can cause health issues for honey bees: it’s the equivalent of only being able to eat a single dish for every meal for every day. Cities have a larger variety of flowers than the countryside. They tested this by analyzing the honey the different hives produced, and rural hives produced honey that wasn’t nearly as complex as the honey produced by the city hives. Even if the city doesn’t have gardens on every corner, there is an opportunity for variety. 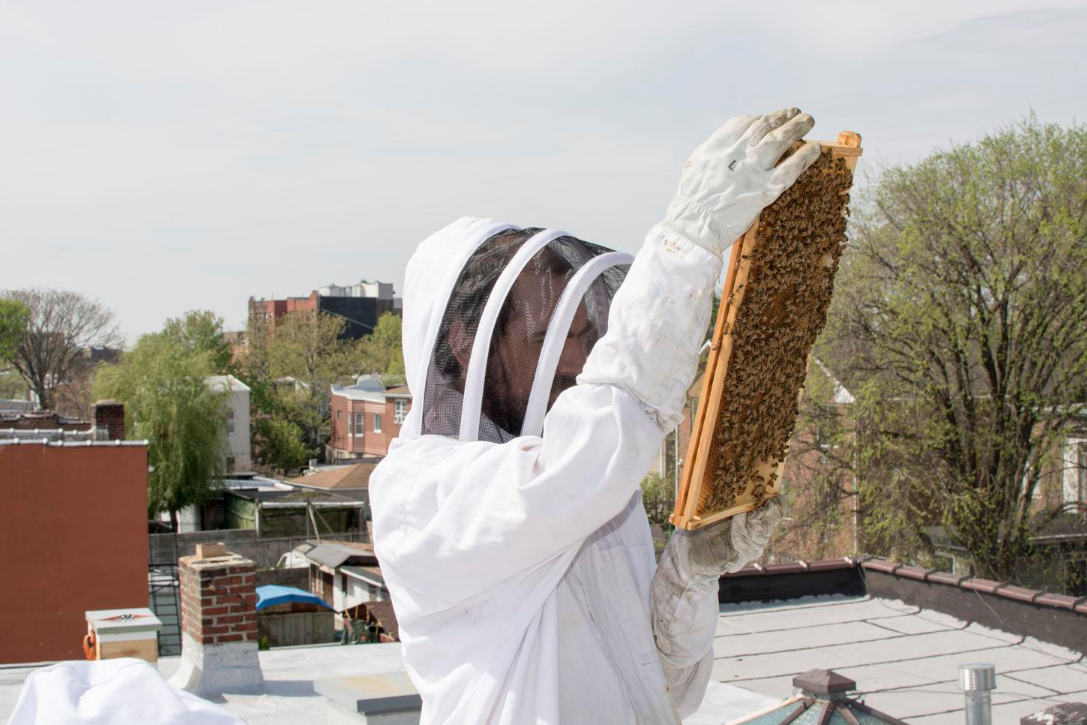 Every February, more than 80 percent of all commercial bees in the United States get trucked to California, according to Scientific American. They make the trek to arrive in time for the almond harvest, which requires nearly a million beehives to pollinate 1.1 million acres of almond farms. The beehives are trucked in from as far as Maine and they don’t stop in California, they make the tour around the country. They pollinate alfalfa in Montana, blueberries in Michigan and melons in Texas.

This constant forced migration puts tremendous pressure on the hives. Bees are exposed to diseases when they contact hives from other parts of the country. They have to survive in farmland that was recently sprayed with pesticides that can damage their health, according to the European Food Safety Authority. The constant moving around damages their ability to have healthy offspring, according to entomologists at Michigan State University.

Commercial beekeeping is a massive industry. It generated 656 million dollars of revenue in 2012, according to the USDA. Its scale and ability to mitigate damage is radically different compared to most urban beekeepers. City apiarists tend to own a few hives and maintain the hives’ health on an individual basis. This caretaking gets muddled as the scale increases.

“We have been trucking bees around the country since World War ll,” Michele Colopy, program director for the Pollinator Stewardship Council, said. “Once the crop is done blooming, you have to get your bees out of there or they’ll starve.”

The bees can’t survive in the monocrop areas, because there isn’t enough nectar there year-round to maintain a hive. After the harvest is done, the bees have to get moving to the next stop. As the bees are trucked around the country, different hives are jammed together on truck beds. This close proximity between hundreds of different beehives creates a very easy path for parasites, mold and viruses to jump from one hive to another.

The varroa mite, a red parasite visible to the naked eye, is one of the most common pests and it can quickly decimate entire hives. Private and urban beekeepers are able to avoid serious damage because the red mites can be monitored and managed in smaller beekeeping operations, but larger beekeepers don’t always have the capability of stopping the mite from spreading before it’s too late.

“Bees need to be checked fairly frequently for any signs of distress during the harvest season,” Valentine Ramirez, an infectious disease epidemiologist for the New York City Department of Health and Mental Hygiene, said. “Just a few checks every week can keep most diseases at bay.”

Urban beekeepers aren’t going to compete with commercial beekeepers, but the skills and techniques they are developing can be used to help create healthier and more sustainable beehives. 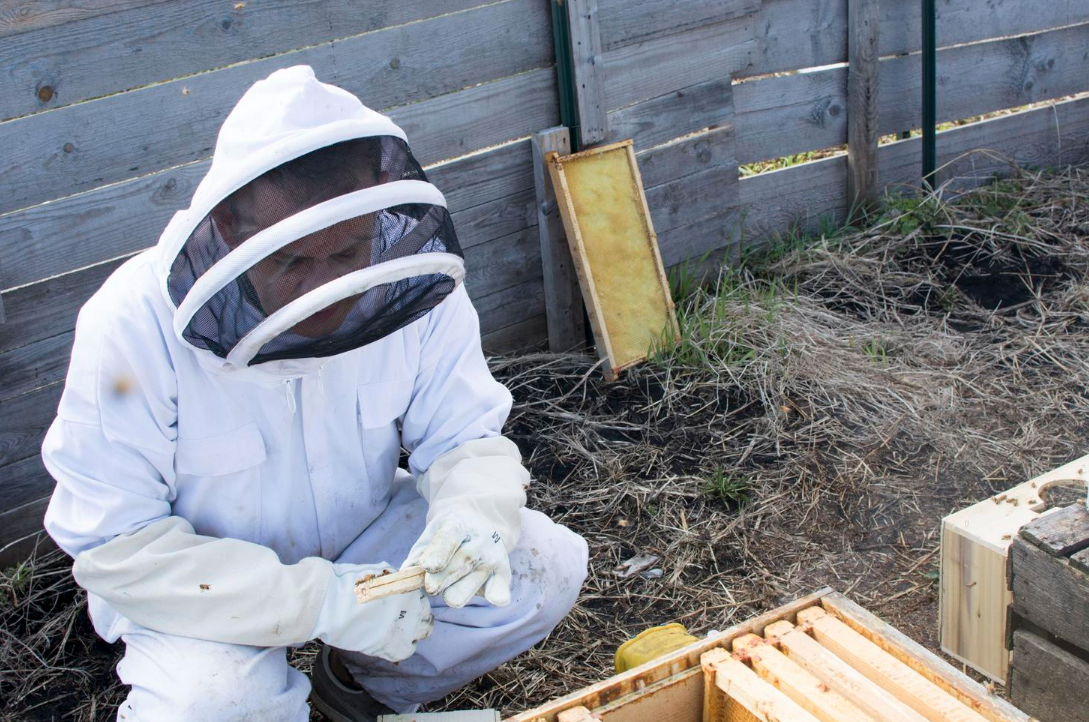 Urban beekeepers in New York and Boston are discovering that the key to helping keep their hive alive is to maintain a more balanced ecosystem, an ecosystem with a large variety of flowers.

“My whole life’s work seems to be coming down to plant a flower,” Wilson-Rich, said. “The data really suggests that this is what makes a difference.”

Deeter and Cichelli, the beekeepers from Queens, planted a vegetable and herb garden in their backyard to help their rooftop beehives. The Pollinator Stewardship Council recommends urban beekeepers ask neighbors to plant flowers in their yards.

The damage to the bee population from CCD, parasites, and the commercial beekeeping industry won’t be reversed overnight. The simple act of keeping a hive on a rooftop or backyard, or even just planting flowers and vegetables for the local honey bees, can be enough to alleviate some of the damage. 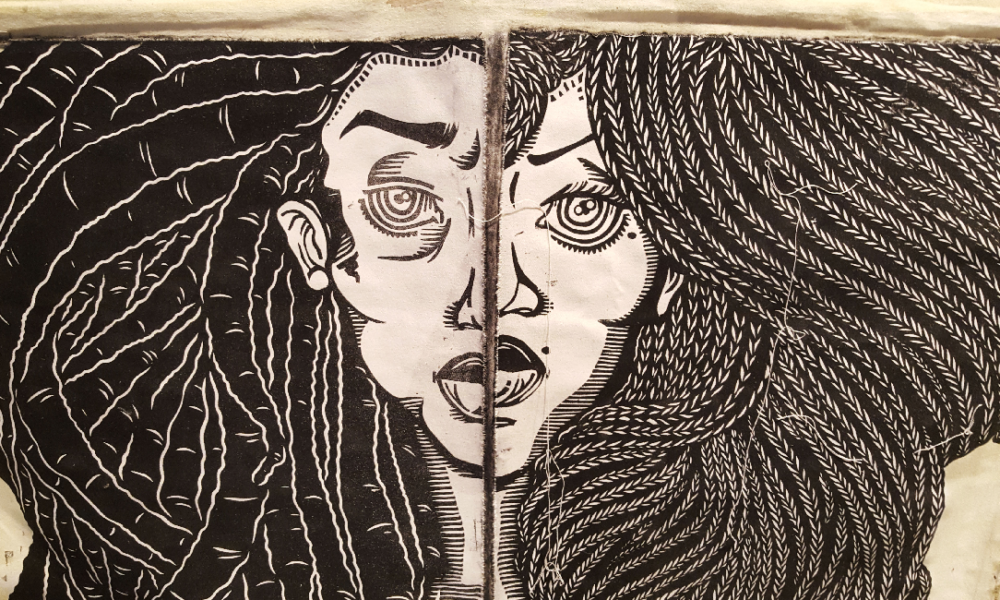 Dewayne Wrencher Wants to Ask You Some Hard Questions 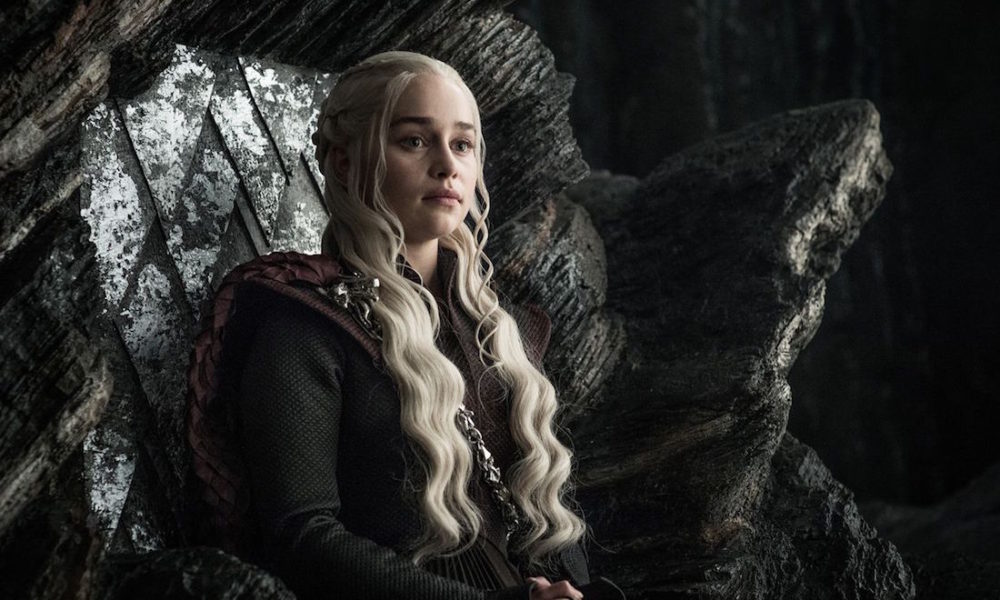