Coming off another impressive year, the Stony Brook men’s basketball team ended the season with a 23-11 overall record and a 13-3 record in the America East Conference. The team is looking to continue their winning ways and crack their Da Vinci code: getting to the NCAA tournament for the first time in program history.

In his first two seasons as a Seawolf, junior forward Jameel Warney has arguably been the most dominant player on the Seawolves roster and in the America East Conference. The 2014-15 basketball season is expected to be another great year for Warney, although he is taking a different role on the team this year while still trying to lead them to the NCAA tournament.

Jameel Warney is the only returning starter from last season this year and the most experienced player on the team, so his role is going to expand from best offensive weapon to veteran player trying to keep a young team together.

In his sophomore season, Warney was as good as advertised. He averaged 14.5 points and 8.0 rebounds per game, all career highs, and led the team, which was fifth in the nation in field goal percentage with .616. After leading the Seawolves to the America East Conference Championship game, where they would lose to Albany 69-60 in a tight game, Warney was dubbed the America East Player of the Year and also earned an AP All-American honorable mention.

Stony Brook lost roughly 30 points, 9 rebounds and 7 assists per game combined this offseason with the departures of Anthony Jackson, Dave Coley and Eric McAlister, leaving head coach Steve Pikiell to pick up the pieces. These players each played over 25 minutes per game, but finding different players that deserve playing time should not be hard this season.

Pikiell, along with his coaching staff, did a great job finding replacements after losing three vital pieces of the team’s offense. They started off by recruiting “Mr. Basketball,” Deshaun Thrower, who won the award for best high school player in Michigan. The 6-2 guard is a winner; he led his team to a state championship last year and is poised to continue his winning ways at  Stony Brook.

The next newcomer is Jakub Petras, a 6-11 forward from Slovakia. It’ll be interesting to see how Petras develops his game in the States. After playing overseas and being named Player of the Future in the Slovakian league, he decided to join Stony Brook and brings depth to the Seawolves frontcourt.

The team also added Pennsylvania recruits Tyrell Sturdivant and Bryan Sekunda. Sturdivant is a 6-7 forward who averaged 15 points and 10 rebounds for Chester High School during his senior year and led his team to the semi-finals of the state championships, while Sekunda is a 6-6 guard who scored over 1,000 points in his three seasons playing varsity for his high school, averaging 21 points per game as a senior.

His time to shine

Roland Nyama, a redshirt freshman from Germany, is ready to contribute in a big way this year. He’s been waiting for his chance to play since the Seawolves coaching staff decided to sit him out his first year. Now that there is an opening in the starting lineup, Coach Pikiell thinks he has a chance to come right in, calling him “the most athletic player we’ve had in the program for a long time.” Roland Nyama admits that he was “soft” when he came to Stony Brook as a freshman,  but the year of practicing with the team has made him stronger physically and mentally. “Americans are really athletic compared to Europeans,” Nyama said. “Compared to what I used to play with, I was LeBron James in Germany and here I’m just a regular dude who is kind of above the average.”

During his senior year of high school, where he played for Holderness School in New Hampshire, Nyama averaged an impressive 20.3 points, 6.3 rebounds and 6.0 assists per game, earning himself an All-NEPSAC third team selection.

There isn’t a light spot in the schedule for these young Seawolves. Besides having to play a tough Columbia team to start the season and then again in January, they have to play three teams that made it to the 2014 NCAA Tournament.

First, in Cincinnati on December 2, they’ll have to play a Bearcats team that went 18-1 on their home floor last year. Luckily, Cincy lost Sean Kilpatrick, who led the team with over 20.6ppg, and Justin Jackson, who was second in scoring with 11.1PPG. They have signed an ESPN top 100 recruit in Gary Clark, but Clark and the Bearcats will have a lot of offense they’ll have to make up for.

Providence is just two games after, and they are a tough home team to play against. They pushed North Carolina to the brink in the second round of the tourney last year and while they’ve lost Bryce Cotton, their top scorer and passer, and Kadeem Batts, who was third in scoring and second in rebounding, they also recruited two players from ESPN’s top 100. Their top recruit towers at 7’2, Paschal Chukwu, who was ranked by ESPN as the 61st best recruit. They also added Jalen Lindsey, a small forward who is ranked 84th. Providence is a team with a lot of potential and although they will be a tough task for Stony Brook, the Seawolves will benefit from having a week to rest after the Cincinnati and Princeton games.

The last team from the 2014 tourney the Seawolves will play is American University. Other than losing Tony Wroblicky, who was the team leader in rebounds and second in scoring, the team has remained virtually the same. With 10 upperclassmen, this is one of the most experienced teams Stony Brook will be playing this season. They are a very disciplined team, finishing 6th in the entire country in field goal percentage and tying with Kansas.

As stated, Stony Brook is a very young team. Luckily, by the time they play their first conference game, they’ll have 14 non-conference games under their belt. The Seawolves were picked to finish first in the conference in the America East preseason poll.

This may very well be the year for the Seawolves. No seniors? No problem! There are playmakers up and down the roster, and a coach that has improved the team each year since he was hired. The team is ready to jump into a new environment with the NCAA tournament, and it’s looking like their season will not disappoint.

By Jael Henry and Joseph Brennan 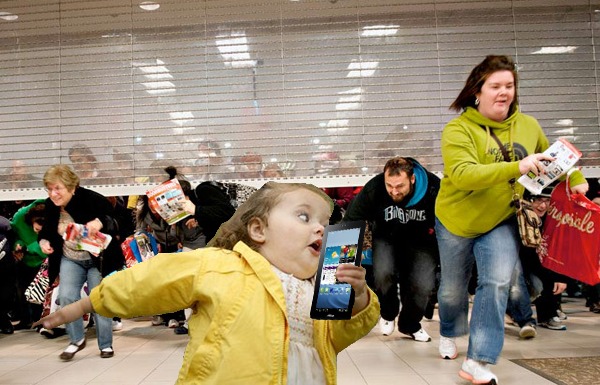 Black Friday: Fighting for the Cause of Discounted Toaster Ovens