Fashion is no frivolous endeavor. Just think back to the last time someone complimented how you looked or what you were wearing. Clothing may have started as a way to protect ourselves from the elements, but since ancient times the fabrics used and accessories worn have shown wealth and class. Not only did class distinction become important, but it aimed to show the current vision of perfect beauty and health, however healthy that image may in truth be. In modern times, with the introduction of mass-production, the lines indicative of social status have blurred. Thus, the focus on beauty has come to the forefront of concerns of fashion, but just as putting on make-up is known also as “painting the face,” fashion too has become an art.

The mockery of fashion in our culture stems from the fundamental misunderstanding of the medium and a growing disdain for commercialism and commercial waste. There is no denying that the fashion industry is a commercial monster, but it also permits every common person to be an artist in their own right. While the designers are the Van Goghs and Monets of the art of dressing, we each are the lesser known artists and incorporate their work into our own styles, perhaps to impress those around us or even just to express our sensibilities, aesthetics and opinions. Even those who claim to have no concern for fashion do the same, and by their decision to ignore the popular image they cry out against the problems of fashion, a clear meaning to those who, like an art critic, have a trained eye in the examination of the medium.

The problems of fashion are indeed many. The peddling of new clothes and new styles each season encourages a gross amount of consumerism, and many clothes have been made in unsafe and unhealthy work environments. The ads and magazines wherein the clothes are advertised often cause poor body image. Even the runway models offer an unrealistic example of beauty. This is not left unrecognized in the industry, however. Magazines give guides for dressing for your body type, and though the given types poorly reflect the wide variety of body types, that is a step in the right direction. Some designers, such as Vivviene Westwood, are activists for various social problems including poverty and the ecosystem. Westwood, in almost every interview she is in, denounces commercialism and encourages people to wear clothes until they are no longer wearable. While it may seem hypocritical as a part of the machine responsible for such excess, her designs are all created in a way so that she can use the entirety of the fabric section in her garments. It fits in with her punk couture design style, which started with designs made for the Sex Pistols, and has always worked towards expressing and forcefully bringing people to see the problems inherent in the society she designs for, and has continued to evolve to protest the newly arising issues as older ones have been addressed.

Commercialism, excess and other economically driven concerns, including the impossible standards of beauty, are separate from the art of fashion and mostly encouraged by the media which reports on fashion. “But what about the garments shown on runways? No one would ever wear that on the street!” is the attitude of statements concerning fashion heard many times. True, the runways of Fashion Week and some of the outrageous outfits that can be found there are ridiculous and frivolous in appearance, but only seeing these designs as clothes to be worn is, again, a misunderstanding of those who fail to see fashion as a form of art. The runway is a gallery of motion that is as vital to the pieces as proper lighting is to the works of the classical painting masters. Designers themselves do not expect the actual outfits of this form to be worn, but are instead showcasing art they have worked on for months. Those outfits are however the inspiration for the ‘ready-to-wear’ clothes – or the kinds of clothes the consumer would buy to wear on a daily basis or even for more formal events. These ready-to-wear styles may have their own shows or be found as a part of the same show and collection as the outfits mocked. These styles are further simplified into clothes anyone can buy at the designer’s store and then further inspire the clothes found in department stores and other smaller stores. If you have ever bought clothes, you have bought into fashion.

You do not need to be skilled to doodle, and you do not need skill to pick out something to wear in the morning. However, the people that do pay careful attention to how they dress and selectively choose clothes to buy are exercising an artistic talent in the same way that others practice their sketching, painting, singing, acting, or any other art. Every outfit says something about the person wearing it, just as doodles in a notebook can reflect a person’s thoughts and interests. It is something anyone can choose to pay little attention to, just as someone might not have interest in drawing, playing an instrument, acting, or even playing and watching sports or exploring scientific inquiry, but to consider the art of fashion shallow and a frivolous waste of time is just as narrow-minded as to degrade someone who spends their time in any of these other endeavors. 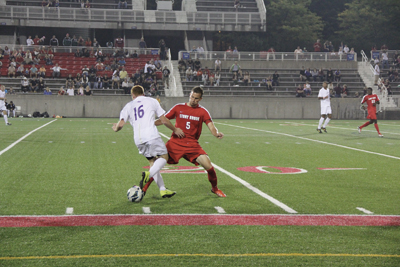