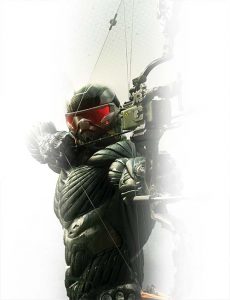 Every now and then a game will come around that is so utterly fantastic that it makes you reset the bar at which you judge games, and sometimes even reevaluate games as a whole. I’m gonna come right out the gate and say that Crysis 3 is not one of those games.

That’s not to say that it is an overtly bad game. My main issue with Crysis 3 is that it is a direct sequel to a game that, when I played it back in March of 2011, I didn’t really feel the want or need to see anything more from in the form of future installments. However, the same could have been said about my experience with Crysis Warhead in 2008 as well as the original Crysis all the way back in ‘07.

Like its predecessors, Crysis 3 throws you into the role of a Nanosuit-clad soldier, this time going by the name of Prophet in 2047 New York City. You’ll follow Prophet on a revenge plot against the seemingly corrupt CELL Corporation. I’m not sure if the game’s failure at an impactful story is due to the narrative elements themselves, or my inability to feel for and associate with a faceless protagonist encased in a super powered suit. Either way, it really fails to deliver anything of substance for me, personally, and by the time I finished the game I could hardly remember the story beats that happened along the way.

Like the previous games in the series, Crysis 3 is a sight to be seen as far as graphical prowess is concerned, especially on PC. That’s not to say it doesn’t look good on consoles, it actually looks pretty great on consoles. The PC version is just on a whole different level, considering you have a machine powerful enough to run it at high enough settings.

At its core though, Crysis 3 is all about the shooting of dudes, and that’s something it actually does fairly well. The controls and movement don’t feel nearly as tight and concise as something like Battlefield 3 or your run-of-the-mill Call of Duty release, but they get the job done, especially when considering how your skill set is fairly basic, you can shoot dudes with a myriad of guns and bow, and use the Nanosuit abilities to augment either your speed, strength, armor or cloak yourself as the situation calls for.

The same mechanics transfer over into the game’s multiplayer modes, which feels tacked on and unnecessary. Multiplayer brings you what you’d expect from a first-person shooter releasing in 2013, you get eight modes like your standard Deathmatch, Team Deathmatch and whatnot, and a whole 12 maps. There weren’t many people on at the time of writing, and I’d be willing to bet that in a few weeks those servers will be a ghost town if you were to search for a match.

The game was originally pitched as having a more open world than the previous installment, but I couldn’t help but feel like I was being constantly funneled down a pretty linear path the whole time. Sure, it’s slightly more open than Crysis 2, but when you compare it to more recent games like Far Cry 3, the issues in pacing and level design become incredibly obvious. It’s not that the level design is obnoxiously bad or anything to that degree, it’s just incredibly average and somewhat lackluster.

And that’s exactly what Crysis 3 as a whole is at the end of the day: painfully average. It’s not breaking any new ground as far as storytelling or gameplay is concerned, but at the same time, it’s not overtly bad or offensive in any particular way. If you’re in the market to shoot hell of dudes and have it look gorgeous whilst doing it, then Crysis 3 should be right up your alley. However, if you’re desiring something more, then Far Cry 3 really is superior in pretty much every way and you should go play that.