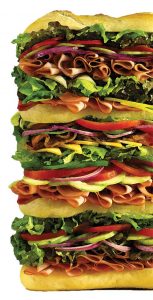 The University So a few weeks ago, I gave The University a try. Although it was everything it claimed to be, the ingredients ultimately came together in a way that I found to be largely unappealing, and I was left confused and frustrated. And the sandwich wasn’t good either. Maybe it’s because I don’t like Swiss cheese, but I suspect it’s something more. I was kind of hoping that with the arrival of a signature sandwich menu, the Union would finally learn what barbecue sauce was. Then the sandwich is topped off with essentially two pieces of onion and the same greasy chicken I’ve been eating for four years. And that’s The University: it’s exactly what it needs to be, but it’s not going to make you especially happy. And the sandwich isn’t great either.

The Final Exam “Final Exam” is a pretty apt name for this sandwich. Much like its namesake, it’s dreadful and you feel like you’ve been railed in the ass once the experience is over. Sporting a not-so-sexy ingredient list of peppermill turkey, Swiss, bacon, something by the name of “savory remoulade,” lettuce and tomato, the sandwich was a terrible disappointment. I actually felt cheated out of my $8 after a few bites, which is a rare occurrence.

The Nicholls Road Unlike the local roadway that shares its name, The Nicholls Road is actually a pretty dope and pleasant experience overall. On the day I got mine, there was an absolute lack of all bread options other than kaiser rolls, which was unfortunate, as I’d wager that the sandwich would definitely benefit from some traditional hero bread. That being said, the combination of chipotle chicken, cheddar, bacon, lettuce and mayonnaise works better than I would have expected, and has actually become my new favorite on-campus food option when I have some money to burn. It’s just a shame that it takes its name from something so terrible.

The Stony Grill The first problem I had with the Stony Grill was that its name does not suggest a vegetarian sandwich, but some sort of barbeque concoction. Still, I’m really glad that there are more vegetarian options available, because I assume a man can only eat so many cheese quesadillas before he goes insane. The Stony Grill is definitely the best non-Mexican vegetarian option I’ve had here on campus, but that’s not saying much. The tofu is surprisingly good for campus food, and I always forget how much I love guacamole. However, there might be too much eggplant. It’s unbelievably greasy, and there are too many slices of it on the sandwich to really taste the tofu. Additionally, I’d ask the sandwich-maker to hold the lettuce, because their lettuce is gross. Ultimately, the Stony Grill is ripe with promise, but fails in its execution. Perhaps in time, it will become a wonderful dinner, but now it’s just odd.

The All American The All American is near identical in its makeup to nearly every sandwich I’ve had that shared its name at a myriad of sandwich shops. However, where all of the other delis excel with one of the most basic sandwich, the Union Deli flounders with it. While the combination of roast beef, ham, mayonnaise, lettuce and tomato may seem simple and straightforward, it is completely underwhelming when slathered in far too much mayo and dressed with the saddest lettuce I’ve seen in years. Eating it, I was reminded of a very sad sandwich I had at a gas station in the Midwest.

The Stony Bold Much like The Nicholls Road, the Stony Bold makes up for much of the lackluster offerings in the deli’s lineup of sandwiches. The inclusion of jerk chicken is a welcome addition to an otherwise stale menu, and melds really well with the chipotle gouda and oh-so-mysterious “savory remoulade” that the deli has recently added to its arsenal. As the name suggests, it’s a much bolder option as far as the range of flavors are concerned than many of the other sandwiches, and it’s ultimately much better for it.