The last week and a half has been an emotional roller coaster ride for men’s basketball. On Friday, Jan. 18, the team fell 81-73 at Vermont, a loss that cost it first place in the America East Conference.  However, Stony Brook responded with a 67-60 victory at University of Maryland Baltimore County on Wednesday, Jan. 23.  This victory, coupled with losses by both Vermont and Albany, allowed the Seawolves to regain first place in the conference.  On Saturday, Jan. 26, Stony Brook returned to Pritchard Gym to host the University of Maine Black Bears, the team that helped the Seawolves by defeating Vermont on Tuesday, Jan. 22.  Stony Brook entered the game with a record of 14-5 (5-1 in America East play).  Maine was 8-11 overall and 3-3 in conference games coming into the day.

The game got off to a fast start.  Maine forward Jon Mesghna nailed a corner trey 33 seconds into play to give the visitors a 3-0 lead.  The Seawolves immediately responded with an 8-0 run, which culminated when forward Tommy Brenton hit one of two free throws 2:23 in.  Guard Anthony Jackson and forward Eric McAlister both hit three-pointers during the spurt.

A three-point shot by guard Marcus Rouse extended the Stony Brook lead to 16-7 with 12:03 remaining in the first half.  On the ensuing Maine possession, Seawolves’ forward Scott King blocked a shot.  He then raced down the court and threw down an “alley-oop” pass from Brenton.  This incredible play energized the crowd and gave the home team an 18-7 lead. 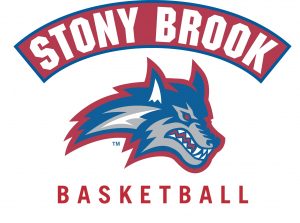 After Stony Brook took a 13-point lead, 25-12, on a McAlister dunk 7:07 before halftime, the Black Bears used a 7-0 run to get back into the game.  Two jumpers by forward   Mike Allison keyed this Maine spurt.  Brenton hit two shots, a jumper and a layup, late in the half, and the Seawolves took a 31-22 lead into the locker room.

Jackson led Stony Brook in first half scoring with 10 points, while McAlister contributed seven points and Brenton scored five points.  Brenton also pulled down six rebounds and was credited with six assists.  Allison and guard Xavier Pollard led Maine with four points apiece in the half.  Free throw shooting hurt the visitors over the first 20 minutes—Maine hit only four of its 12 foul shots.

Less than one minute into the second half, Stony Brook forward Jameel Warney blocked a dunk attempt by Maine forward Alasdair Fraser.  Brenton then nailed a jump shot to extend the Seawolves’ lead back to double digits, 33-22. A conventional three-point play by Coley was followed by another McAlister dunk, which extended the Stony Brook lead to 40-22.

The visitors treaded water for the next few minutes, before a trey by forward Zarko Valjarevic brought Maine to within 53-41 with 11:18 remaining. Valjarevic then sank two more three-pointers to cut the Seawolves’ lead to only seven points, 55-48.

McAlister slammed home a lob pass from Brenton to extend the Stony Brook lead back to double figures, 63-53, with 5:08 remaining. A Warney dunk on the ensuing Seawolves’ possession gave the home team a 65-53 lead; Brenton was credited with an assist on the dunk, giving him a triple-double for the game. Though Maine remained within striking distance throughout, the Seawolves were able to hold on for a 79-69 victory.

McAlister led all players in scoring with a career-high 22 points for the game.  Brenton had a great game, earning a triple-double with 15 points, 14 rebounds and 11 assists.  Valjarevic led Maine with 21 points, all on three-point shots.  Black Bears’ guard Justin Edwards scored 19 points but made only four of 14 free throws; he usually shoots 71 percent from the foul line.  Maine struggled shooting free throws in general, making only eight of 24 attempts.

The win improves Stony Brook’s record to 15-5 overall and 6-1 in conference games on the season.  The Seawolves begin a three game road trip at Albany on Tuesday, Jan. 29.  The team returns home, Tuesday, Feb. 12, when it hosts Binghamton at 7 p.m.