The Undergraduate Student Government office on the second floor of the Student Activities Center is always bustling with activity. Though the senators are only required to spend two hours a week in the office—plus time in committee and Senate meetings—it seems like most of them are always around.

What many students, both at Stony Brook and across the country fail to realize is that being in student government is an actual job, one with a paycheck and everything.

More than 71 percent of elected student officials are compensated in some way, whether through hourly wages, tuition assistance, class credit or stipends, according to the American Student Government Agency, which boasts over 1,000 member institutions (Stony Brook is not among them). Among public universities about 85 percent of officials receive a salary.

At Stony Brook, senators receive a biweekly stipend of $100. Last year’s senate voted to decrease their weekly payment of $75 in order to have more money to give back to student clubs. To receive their pay, senators are required to complete their office hours, go to at least one committee meeting per month and attend weekly senate body meetings on Thursday nights. Members of the Executive Council, made up of the president, treasurer, and the five vice presidents, are paid $180 each week and are required to work 15 hours and attend meetings.

Treasurer Allen Abraham, who says he usually spends more than 20 hours a week at work, thinks his salary is well-earned.

Abraham, a nonvoting member of the senate, is responsible for overseeing the USG budget, communicating with club treasurers about budget concerns, chairing the senate Budget Committee and determining the budget for clubs each year.

“The compensation is justified for my position and the amount of work that comes with it,” Abraham said.

However, Jordan Hummel, a 2010 graduate of Fairfield University who served as vice president of the Fairfield University Student Association did not receive any compensation for her services. Hummel feels paying students would not have really had an effect on who chooses to be involved in FUSA, or student government in general.

“It was discussed while I was at Fairfield but I think the idea got shut down pretty quickly,” she said. “It definitely would have attracted more students to run for positions, but I’m not sure it would change the type of students who run for these positions.”

Amanda Cohen, vice president of clubs and organizations said it’s not the pay that draws people to USG.

“I know many people who ran and didn’t even know they were getting paid if they won,” she said. “I ran for the position because I wanted to make a difference and be involved. The paycheck is just a perk.”

Cohen is trusted to oversee that all clubs and organizations abide by USG rules and acts as a liaison between clubs and USG. Cohen also helps Special Services Council determine whether newly forming or defunded clubs should be given a budget, and works with club officers to facilitate that process.

Cohen does recognize that the salary may “draw in a select few,” but thinks the majority are in it for the right reasons.

Sciences, was surprised to learn that he would be compensated. “Most senators, including myself, did not even know senators were paid positions until after winning the elections,” he said. “The people in USG are hard working and truly want to do what is best for the student body.”

So far during his term McIlvain has been chairing the Programming and Activities Committee, which mainly helps Cohen look over Special Services Council budget applicants before the applications are sent to the senate body for review.

Mallory Rothstien is another College of Arts and Sciences senator. She represents USG on both the sustainability task force and EcoLeaders Committee disagrees.

“I definitely think payment can attract someone to run for office who might not have otherwise,” she said. “I’m not one of those people though.”

As a senator, Rothstein has also reached out to underclassmen to promote involvement in USG, assisted at the Involvement Fair and with homecoming. She also is an active member of the Budget Committee, which helped revise both the SSC bylaws and the financial bylaws.

“It’s a lot more work and responsibility than students outside of USG think,” Rothstein said.

Rothstein’s dedication to USG and the students is clear through her choice to donate her stipends to clubs in need.

“I had decided last semester when I ran that I would give the money back to Stony Brook clubs and organizations that I have felt needed a small boost in their budget for an event or other desires they express,” she said. So far this semester, Rothstein has given money to four on-campus organizations, and her most recent paycheck went to the Superstorm Sandy relief effort.

Like Rothstein, all the senators and executive council seem to be interested in more than just the money. Rebecca Safeer, a CAS senator, feels the work that she and others do benefits the student body as a whole, rather than her wallet.

College of Engineering and Sciences Senator Kathryn Michaud thinks the compensation for senators is fair, because it levels the field for students with financial needs to run for office.

“I think that senators should have the option of being paid because the amount of time they are required to spend for USG takes away from the time they could be working at another job,” she said.

Michaud has found that a lot of the senators, including herself, go above and beyond the minimum requirements. Michaud said she frequently spends more than 10 hours a week in the USG office. Michaud is a member of two committees that meet weekly, including the Programming and Activities Committee.

“Many, if not most, of us are in the office a lot more than [required],” Michaud said. “The amount of time we spend in USG does not affect how much we are paid, meaning that the extra time we spend is not reflected in anyone’s paycheck. ” 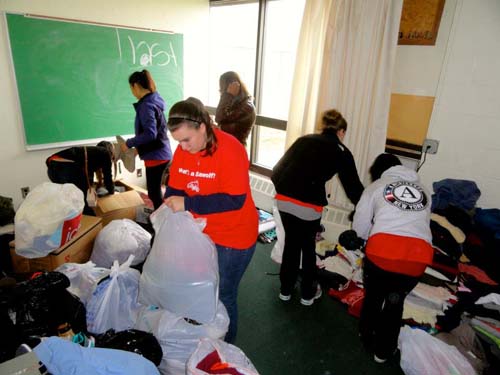 Students to the Rescue

My Night with Edward Cullen