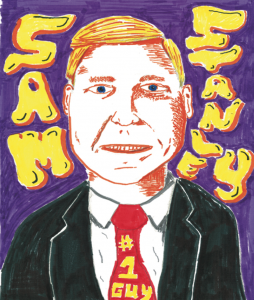 “Stony Brook University is on the move, and we’re moving in the right direction,” President Stanley said during his State of the University Address on Wednesday, Sept. 19. Stanley took a mere 24 minutes to detail the progress that Stony Brook has made, and will make, since his 2009 inauguration and into the future of presidency.

Using his inaugural speech to chart the improvements made during his administration, Stanley tracked his goals of elevating the quality of the university by first increasing the number of qualified and distinguished professors and lowering the student-professor ratio. Over the course of the next five years, 250 new faculty members will be added to the university payroll.

To do so, the budget of the university had to be balanced, and thus the SUNY 2020 program was passed. This program will end large budget cuts, and instituted what Stanley called “rational tuition increases,” or $300 annually for five years.

According to Stanley, this would help to achieve the university’s ultimate goals to “build on existing areas of excellence,” encourage “interdisciplinary scholarship and collaboration across the campuses” and develop programs and areas that distinguish Stony Brook from its peers in the SUNY system.

The first round of “cluster hires” will be announced by Provost Dennis Assanis soon, and are based on program proposals submitted by professors campus-wide.

In the last few minutes of his address, Stanley recounted his travels to Madagascar and Kenya to view Stony Brook programs in action. He reflected on the international nature of the university, which is evident in its opening of SUNY Korea. This makes Stony Brook the only school allowed to offer degrees in South Korea by their Ministry of Education, Science and Technology.

Stanley saved his visions and plans for the future, naturally, for the last segment of the address, saying, “One measure of any institution’s health is the number of cranes on campus.”

Plenty of those can be seen on both the main and Southampton campuses, as a new marine sciences laboratory, computer science building, and Hilton Garden Inn all rise into existence as students bustle around them.

Opening next month, the new recreation center will open, a “state-of-the-art facility that will make a tremendous difference in the quality of life for each and every student at Stony Brook University,” Stanley said.

Seeming to speak of the future of the university itself, he said quietly, “I can’t wait.”