In the past seven years, writer/ director/ producer Ryan Murphy has made an ace career out of over-the-top television. Whether it’s a high school drama (Glee), a scary story (American Horror Story) or a catty mean girl whodunit (Scream Queens), Murphy has taken what could’ve easily been overcooked American soap operas and made them deliciously dramatized cheese. But how does one apply that Midas touch to one of the most infamous American news stories of the last 25 years? Come out with guns blazing and keep people guessing.

Based on Jeffrey Toobin’s book, The People v. O.J. Simpson is a limited series running on FX with Murphy as the executive producer and director of the first two episodes. It’s an ensemble drama following the trial of the once-beloved athlete/ superstar for the murder of his ex-wife and her boyfriend. The pilot, “From the Ashes of Tragedy,” premiered this past Tuesday with a bang and strong subtext in the trial: “Everyone has an agenda.”

The pilot opens with the Rodney King beating in 1991 and the L.A. Riots the year after, setting the uneasy atmosphere at the time when issues of race were in constant discussion on many issues (funny how times don’t change, huh?). Fast-forward to 1994, we see O.J. (Cuba Gooding Jr.) leaving in a limo trying to catch a plane to Chicago as he muses on the first time he experienced fame when he met Willie Mays. The same night, cops enter the home of Nicole Brown Simpson to find her and another man dead in a pool of their own blood with bloody footprints leaving the scene and a bloody glove at the scene itself. When the cops arrive at O.J.’s house to find a matching black glove, drips of blood, a white Ford Bronco with drips of blood on it, the police draw a conclusion:

“This is a crime scene.”

And we’re off. The pilot brings in the cavalcade of characters: district attorney Marcia Clark (Sarah Paulson), defense attorney Johnnie Cochran (Courtney B. Vance), friend/ former attorney Robert Kardashian (David Schwimmer), high-rolling celebrity attorney Robert Shapiro (John Travolta) and many others to surely get more time as the season progresses. Here, all eyes are on O.J. as the media starts swooping in, and O.J. starts mentally checking out. Clark’s office think he’s guilty, O.J. doesn’t trust anyone, Kardashian is just trying to keep his friend together, Cochran wants nothing to do with the case, Shapiro keeps things moving, and O.J. isn’t sure how to handle all of this. Clark’s office is trying to put a case together with witness interviews and O.J.’s police questioning, while Shapiro and Kardashian are trying to make sure that O.J. has a clear conscience before appearing before any cops or cameras. Shapiro is pulling most of the strings, playing up O.J.’s celebrity status to buy time from the cops, but Clark wants O.J. jailed and is very sore about him since he walked from a spousal abuse charge in 1989. A warrant for O.J.’s arrest is issued, but Shapiro says he’ll bring Juice in personally. That’s easier said than done as Kardashian walks in on Juice writing a will as he contemplates suicide with a gun to his head (in young Kim Kardashian’s bedroom, no less). But when the cops come to bring in O.J., he’s taken off in the white Bronco.

The People v. O.J. Simpson starts off with a hell of a bang. As with all Ryan Murphy productions, everything is highly dramatized to make for a TV show that’s hard to pull away from. Each character manages to represent a side to the O.J. trial. Clark is the modern feminist take: a woman who sees the scandal as a celebrity getting his justice for abusing and murdering an innocent young woman. Cochran, though underdeveloped in the pilot, will take on the racial route with the post-riot black community and see a victimized man bullied because of his skin color. Shapiro is the fame whore: he sees a beloved American icon he can help (like Marlon Brando and Johnny Carson before) turn into another story he can tell to friends over lunchtime martinis. Kardashian seems more like a victim, being pulled into this storm of bloody deceit and gossip while just trying to help a friend who’s shared vacations with his children. O.J. himself is the real enigma, having moments of genuine disbelief in the situation he’s in and others where there’s nothing but guilt in his emotions.

The acting is something worth revisiting in later episodes. Paulson especially digs into her role showing both a take charge attitude and nakedness as the busy body who may been a bit in over her head. Vance is not used enough in the pilot so surely he’ll show some grit later on, but he makes a good enough impression to keep an eye for the next set of episodes. Schwimmer is miles away from dorky Dr. Geller and his sitcom days as he embodies the hopelessness Kardashian feels about the situation at hand. Gooding Jr. is the other standout performer, tearing down the celebrity smile that won over millions and, instead, showing a scared man. The trick is that you don’t know if he’s afraid he’ll be wrongly imprisoned or afraid his guilt will overtake him. The one sour grape in the cast is, surprisingly, the biggest star. Aside from the super-distracting facial makeup, Travolta’s constant overacting is in dire need of reigning in. Every time he talks and waves his arms to project his lines, it feels like he’s playing for the back row of the theatre despite being on a TV show.

The best way to approach The People v. O.J. Simpson is too see it like a soap opera taken seriously. The actors barely look like their real-life characters, any possible angle one could take the O.J. trial is mentioned and emphasized (surely more so as the season progresses), and anything that can be dramatically emphasized is amped up. But to that degree, the mood fits the O.J. case because every possible update was big news. O.J. Simpson, loved and hated, was always in discussion at the time. No one had ever dealt with a story like this. When you think about it, one wonders why a show like this wasn’t made before. Stick with it. 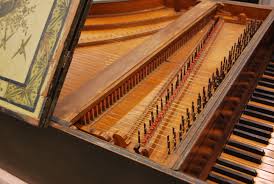 Harpsichording to a New Career