In collaboration with the Smithtown Branch of the American Association of University Women and Running Start, a company that aims to increase women’s role in politics, Stony Brook University held its first Elect Her-Campus Women Win program on March 16 in the SAC.

“It’s an honor to be among 13 universities chosen nationwide for this important training,” said Dean of Students Jerrold L. Stein in a press release. “Giving more young women the valuable experience of running for and serving on student government is a win-win for the university.”

Elect Her is a training program that aims to lower disparity between the number of men and women in government by providing women with the skills and confidence to run for office. Stony Brook was one of 30 universities across the nation to be selected based on the ratio of male to female participants in student government. The purpose of the event at Stony Brook was to encourage women to run for a place in the Undergraduate Student Government, which is currently holding elections for next year.

USG Executive Vice President Deborah Machalow submitted Stony Brook’s application for Elect Her after attending a women’s leadership conference in Albany. Machalow said her interest in politics stems back to her childhood, when her parents let her stay up late to see Bill Clinton win the presidential election. It was then that she decided she would one day run herself. At Stony Brook she has also served as a USG senator and as president pro tempore.

Machalow said she hoped the Elect Her program would encourage a more diverse group of students to run for student government. Currently, five out of the 22 senators are female.

“You have to have a bit of an ego,” Machalow said about entering politics. “You have to fight and sometimes get your hands dirty, and women are socialized not to want to do those things.”

She added that though she hoped more women would run for USG positions, it’s important that people don’t elect just any woman. “You have to elect the right woman,” she said.

Nassau County District Attorney Kathleen Rice and Suffolk County Legislator Kara Hahn presided as speakers and used their own experiences to outline the benefits and struggles of running for office as women. They stressed ways in which they impacted society and the workforce and how other women can too.

“I want young women everywhere to understand that the leaders who shape our communities, our nation and our world can come from anywhere and be anyone,” said Rice in an email. “Everything that I’ve accomplished in my career is due to the women who came before me, and who fought to build a strong enough foundation for all women to stand on.”

“Through Elect Her, we are trying to increase awareness that women in general can run for office on campus,” said Lubitz. “Ultimately, we will see more women become involved in clubs and organizations while holding executive board positions. At the time of graduation, women will have the knowledge to take what they learn from Elect Her and apply it to the real world.”

As student liaison, Lubitz will attend a conference in May at the University of Maryland, where she will meet other student liaisons to discuss the positive aspects of their respective Elect Her programs and where they can improve. She said the event was a positive experience and hopes to take part in it again in the future.

“I think everything was pretty successful, and I’m pretty happy with the turnout,” she said. “I hope to see the Elect Her training center return next semester because I think it’s very important to encourage girls to run for a leadership position on or off campus.”

A contest was held at the event to see how well the women could petition to the student body. Joseph, the contest winner, described the goal of the contest and expressed concern for the length and impact of the program.

“Apart from the obvious, you want to see [women] get involved more confidently, not just solely on their gender, but because they have a vision,” she said. “For now, I don’t think there would be any long-term impact if they don’t follow up. It has to be a program instead of a one day training. They planted the seed. Now, they need to help make it grow.” 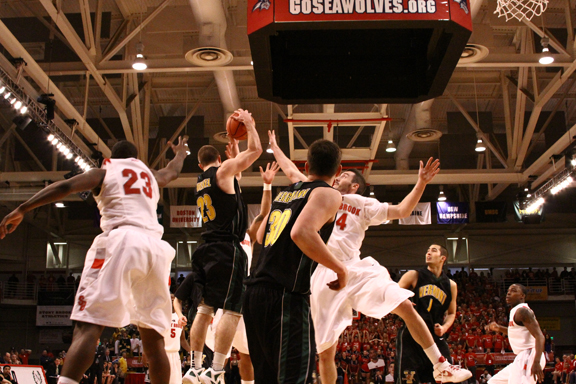 No Date For Seawolves to the Big Dance